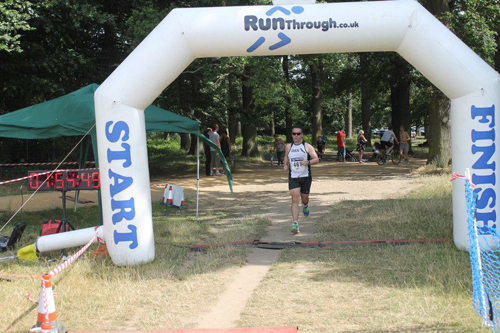 The Richmond Park Half Marathon is organised by the RunThrough.co.uk Events team and consists of 4 laps around part of Richmond Park, which basically boils down to 4 laps of the Richmond parkrun course plus an extra dog leg out-and-back on each lap to hit the magic 13.1 miles. All of this would have been apparent had I bothered reading any of the pre-race literature before signing up but I saw a post on the Eagles Facebook group with a picture of a deer shaped medal and thought that it looked nice. I also figured that a catered long run with friends in the lush surrounds of Richmond Park would make a nice change from the usual Sunday club run by the river.

I rocked up early by car to use the Sheen Gate car park, which is the same area used by the Richmond Park Marathon, and I could see the small race village taking shape in the distance as runners approached from every direction to find the registration desk. There was no bother collecting my race number& chip and I was glad to see that Tom, Ellen & baby Skye were already there representing the Eagles.

Tom would be running while Ellen looked after Skye so me and Tom tried to figure out how the timing chip was meant to safely fasten to our respective shoes. I bravely showed how the chip was meant to loop around the laces and fasten in place. Then it promptly popped open and made me look an idiot. Tom was having problems because his chip didn’t have the necessary hole for one of the laces to fit through. In the end I was able to correctly loop and pass through a lace while Tom looped and then use a safety pin to hold his together.

Other Eagles began to arrive so I dropped my bag at the baggage tent before going for a warm-up / find a toilet run. I also took the chance to find out about the route (aha, laps!) and check where the water station would be located (just the one, near the start / finish and available on each lap).

We were led to the start line and a countdown later, we were all off on our first lap of the course. I spent the first km chatting to fellow Eagle Claire, comparing recent training and personal bests. I got caught in a bunch of runners so Claire opened a gap that she maintained for the rest of the race. My race went like this:

Lap 1 – gentle undulations, felt good, nice chat with Claire and then enjoying the down slopes so get the legs moving. Wondered how they were going to make up the extra distance from the 5km parkrun course and discovered the dog leg out-and-back.

Lap 2 – walked the drink station to grab a drink and then back on the trail.

Lap 3 – take another drink of water as I continue pushing on somewhere between tempo and threshold pace and feels easy. Getting a bit warm but start to wonder if I should push on a bit and catchup with Claire, who maintains a 300m(ish) gap on me. Decide to keep at the same pace and not get caught up racing.

Lap 4 – a last drink of water and enjoying the first half of the last lap. OMFG! Who put that invisible wall of doom across the course! Need a drink, need a drink, and REALLY need a drink. Ask another runner for a gulp of his sports drink and he obliges. Shuffle may way to the finish before grabbing two bottle of water and laying down on the grass. Bliss.

So my race ended with a sharp lesson in taking on more liquid during hot conditions. I walked the drink station at the end of every lap to take a cup or bottle of water each time but it clearly wasn’t enough. I will probably go shopping for a new water belt, something with some small bottles that I can wear on races up to a half where there are opportunities to refill the bottles if needed.

The race itself was nice and Richmond Park is always a joy to take in. The laps didn’t bother me and this is one of those rare courses where the down slopes seem more plentiful than the up slopes. The organisation was well thought out and there was plenty of water and fruit available at the finish. Plus the deer shaped medal!