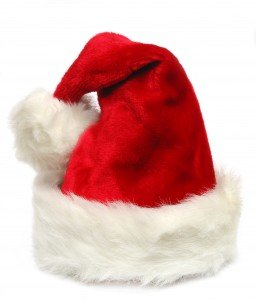 Beep Beep!, sing-song, thrown out and onto The New Inn for mulled wine & mince pies.

Our annual Santa Run through Ealing in aid of Ealing Churches Winter Night Shelter took place after Gunnersbury parkrun and refreshments in the café. We crowded together for the obligatory ‘Team Santa’ photo and a brief pep talk on behalf of the wonderful local charity before our slow jog up to Ealing Broadway.

The Son had flown off to Japan during the week to spend the holiday period with his grandparents before we fly out later so he was not able to make the Santa Run this year.

The route takes us out of Gunnersbury Park and by the busy A406, where the sight of a clause? sack? sleigh? of santas causes all the car drivers to beep their horns in greeting. The truck drivers get to air their horn and we persuaded the bus drivers to join in the fun.

A Christmas carol stop at the Ealing Broadway shopping centre was made for another collection although an overzealous local official tried to make us move on due to some Scrooge like argument about a licence for music in a public place. We had already arranged our stopover with the relevant officials beforehand.

Our final stop was at the New Inn for some mulled wine and mince pies. Lovely.