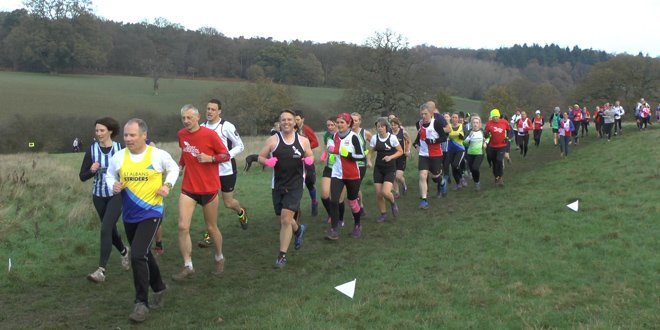 What a difference a year makes. My first appearance at Trent Park was the corresponding fixture in 2013. The day after the Eagles Christmas party. I felt awful and the fumes floating around our tube carriage was enough to get fellow passengers pissed as a newt. Scroll forward 12 months and I struggled round the course once more, feeling ill and approaching (what I didn’t know at the time) surgery to deal with… a not very pleasant medical problem.


Our beleaguered team of runners gathered on the Acton Town platform to descend on the Piccadilly line train to the end of the line Cockfosters. One of our team once again reeked like a brewery but didn’t have the excuse of the Christmas party to fall back on. Shoes were examined, spikes smothered in Vaseline & screwed in, and tales of cross-country mishaps of races past discussed.


We claimed our patch of grass near the start of the race and went our separate way for toilet visits, warm-ups, and checking out the state of the course. A quick team photo and we were huddled at the start line for a run briefing that wasn’t audible at the back of the pack and then we were off. Runners streamed along the top of the field before a sharp right took us down to the bottom for the field with the first uphill looming. I would like to tell the story of a fit again Running Dan picking off the runners and gradually rising through the pack but that would be a fib. I started near the back, overtook a few on the first km, and then tussled with a few runners until the end. Sometimes overtaking and sometimes being overtaken.


It’s a challenging course to get the lungs screaming. A lap of the starting field, which includes a down & up section, before heading out for two laps of the nearby woods. I remembered the big muddy hill near the start that saps the legs as you approach the finish but I forgot how undulating the ‘flat’ woodland section was. That’s the joy of cross-country though, multi terrain with mud and hills aplenty.


I huffed and puffed my way round until a last minute sprint saw me overtake no-one before I crossed the finish line. This wasn’t a race of glory but it was great fun and sets the scene for a winter of muddy racing before spring marathon training.