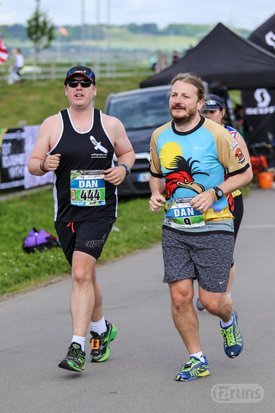 This was going to be my A race of the spring season. Enjoy a jaunt around the Brighton Marathon, revel in the sun-kissed views atop the hills of the Three Forts Challenge, and then burn a sub 3:45 path around the Kent Roadrunners Marathon.


I successfully filmed my way round Brighton with a permanent smile on my face. A leg strain picked up on a cycle loop of Richmond Park with The Son disturbed my training and with it went my running mojo.

Some sporadic running came and went. A few half-hearted attempts at some races. The fog, wind, and hills of the Three Forts Challenge failed to ignite my running joy.


That’s how I arrived at the Kent Roadrunner Marathon. Under-prepared, under-trained, and overweight.

The Son accompanied me on the early morning drive through London to the Gravesend Cyclopark. He had been promised a day at the nearby Bluewater shopping centre with grandma while I faced several hours of pain & misery with Other Dan by my side.


I joined the toilet queue as The Son went searching for food and drink in the Cyclopark café. I met up with Ruth, a friend of a friend tackling her first marathon, as The Son stomped around in boredom thanks to the café being shut. Other Dan joined us and we prepared for the start of the race as my mum arrived to cheer us off before taking The Son out for his shopping adventure.

So what do you get for your hard-earned entry fee for the Kent Roadrunner Marathon? Lots & lots and lots! This is a cracking race with superb organisation, held at a tidy location, a personalised race number, plenty of on-site amusement for your adoring cheer squad, charming and good-humoured marshals, well stocked aid stations, a medal the size of your face, and the chance to run loops of an undulating course (ok… that last part doesn’t float my boat either… but everything else makes up for it). 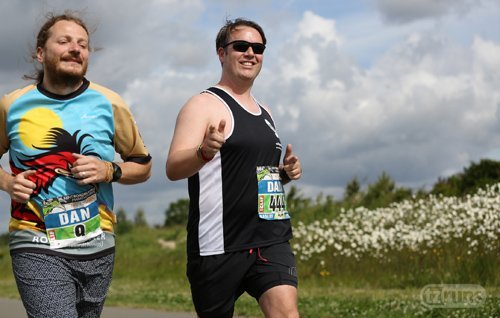 Our race started and we jogged along around 4 hour pace, chatting away, and an arm full of coloured bands to discard at the end of each lap so we knew how much torture remained. Topics of conversation veered from picking out who we thought would win based on watching the race leaders, admiring runners who had dressed for the cow theme, swearing each time we climbed Tourettes Hill, and guessing how far I would get before the wheels came crashing down off my wagon.


My struggles began just before half way as I could feel my pace gently slowing as the sun continued to beat down. There seemed to be clouds everywhere except over the Cyclopark, which meant I was overheating on top of my lack of fitness. Other Dan continued to show empathy and compassion to my plight (ha!) and didn’t spend several laps taking the piss out of me (yes he did!). I deserved it though. 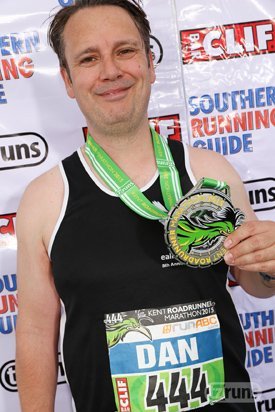 The bloody hill got to me and the walking breaks got longer each lap. We had a brief respite when we started a water fight at the aid station although a marshal scolded us for wasting water (another marshal started it by throwing water over us to help cool us down so not really our fault!). I carried on walking and occasionally running as Other Dan continued to (rightfully) mock me. He made some quick calculations and made me speed up because there was no way that he was going to record a marathon slower than Mrs Other Dan. We both finished. Me a broken man and Other Dan looking like he’d just completed a warm-up. Git.


We collected our huge medals and passed through the photography tent where our pictures were taken and later emailed to us for free plus some photos taken during the race. What a nice touch. Ruth had a cracking run and, although she didn’t hit her sub-4 goal, she really enjoyed the race. I enjoyed it in a ‘it hurts so much that it’s actually funny’ kind of way.