We had planned another London parkrun jaunt but then Other Dan noticed that the Central line was out of action due to planned maintenance so he  found us somewhere new to visit where I could pick him up at the Polish War Memorial. I put my trust in Other Dan to check out the course and he promised me a flat & dry reasonably fast course.  Except he confused another parkrun course with Wycombe Rye parkrun and we ended up with soggy playing fields, wet paths, a welcoming event team, and some steps.


There is a cheap pay & display car park near to the finish area but beware that it gets full so it’s worth getting there a bit early. We accidentally arrived early but even then the available spaces were getting scarce. There seemed to be plenty of facilities nearby – cycle racks, toilets, and a café at the Wycombe Rye Lido.


I took along my recently purchased GoPro camera to practice filming for future running events but so far I haven’t got round to editing the footage (lazy RunningDan!). It didn’t help that I filmed everything in super-bloomin-wide mode* so everything looks a bit weird. When I do eventually get round to stitching something together then I’ll link to it from this post.


The event team have a friendly ‘new to parkrun / new to Wycombe Rye parkrun’ briefing so we were able to find out about the course and see just how friendly and welcoming the team here are. Everyone was then led across the field to the start line and we were off. Except for me. I stood back to film the start and then ran round to join the back of the pack and carried on filming.


Other Dan didn’t have time to wait for me arsing around with my camera so he shot off as I bumbled my way along the paths. I even stopped for a while at the bottom and then the top of the steps to film (honest, I will post the video one day!) before completing the course. I even had time to hand Other Dan the camera so he could record my triumphant finish.


I loved that everyone dutifully took their finish token to a special board after scanning, to hang their token at the corresponding number. I’m sure that makes things easy for the team to get the tokens back into order.


We popped into the café for a drink before heading home to enjoy the rest of the weekend. It’s a deceptively cheeky little course with lots to admire.


* That may not be the actual technical term but what man in their right mind actually reads the manual before using their new toy? 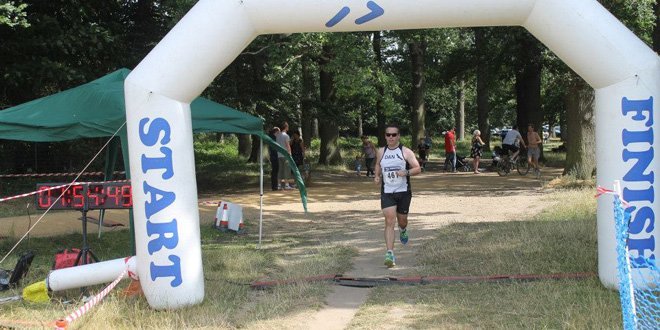