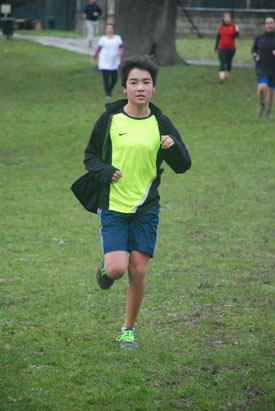 A rare outing to a parkrun inaugural event as Other Dan joined me and The Son at South Oxhey parkrun. We tend to avoid inaugural events these days, to lessen the burden on the new event team as a hundred plus tourists descend at the same time to the new location.


We weren’t going to attend South Oxhey this week but events conspired against us, notably the lack of trains on the Central line for Other Dan to meet us, and the ‘nearness’ factor of the new event meant that this was our only choice if we wanted to continue our tour of London parkruns or visiting a new location.


There is plenty of parking at Pavillion pub, which is next to the park, so we were able to huddle in the warmth of the car for a while before joining the crowd at the start area. We didn’t catch the run briefing because we were at the back and other runners were chatting (booooooooo!) but we figured that we could handle jogging round at the back without any problems.


The course consists of 3 laps that are all on grass although there is an option to use a tarmac path that runs along part of the course, which is located at the last section of each lap as you approach the finish funnel.

We let Other Dan go haring off into the distance while I chatted to The Son back of the pack. I had brought trail shoes with me (needed!) but unfortunately The Son doesn’t have any trail shows so he was left with his normal runners to cake with mud. I would go and buy him several options but; a. He doesn’t parkrun very often; and b. He’s growing so quickly and these days everything we buy him is too small month by month. 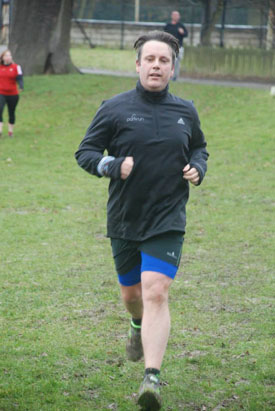 The course might look straight forward but it’s muddy (in the winter), rolling with slopes, and weaves around some trees. The cool thing about a 3 lapper is that you don’t tend to need many marshals but those that were out on the course were cheerful and encouraging each time we jogged past.

The pub opened early to provide food and drinks to everyone at the end but we had to get going otherwise The Son wouldn’t make it back for his science lesson. It was great to see a new parkrun in the Watford area, a wasteland of no parkruns up until this point.