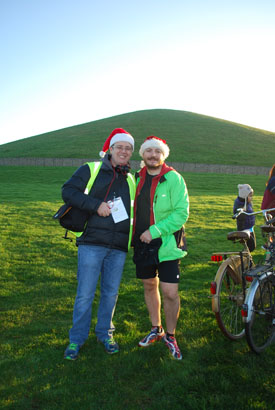 Christmas Day volunteering for me this year as The Son joined me, Other Dan, and a host of Ealing Eagles at Northala Fields parkrun. I’m under doctors orders not to run for at least two weeks so I volunteered on finish tokens for this special Christmas Day parkrun while The Son somehow made it out of bed before 9am (funny how that happens when there are presents under the tree, eh?) with his runners laced up and ready to run.


The sky was clear & blue and the runners in good spirits as everyone congregated near the finish area. The Son went strolling up the hills to take some selfies while I chatted to Other Dan. I brought my camera with me to grab some photos of the runners as they made their way on the loop around the mounds before taking my place in the finish funnel to welcome back the first runner.


I was joined in the funnel by Paul on timer, another Eagles and Gunnersbury volunteer regular, so I had someone to chat with during the early stages, someone I could rely on to keep the finish funnel moving, and someone who would keep me updated on the number of finishers so I could verify against my string of finish tokens. I had two sets of tokens (1-100 & 101-200) so there was a little bit of fiddling required when I got near to the 100th finisher but thankfully I was able to commandeer Martin as he finished (yet another Eagle and experienced volunteer) to safely pass me the second set of tokens.


I remember Other Dan finishing swiftly (top 40) and The Son giving me a quick hello as he took his finish token from me (126th) as he finished his first ever run at Northala. He’s hardly been running recently so I was pleasantly surprised to see he ran under 27 minutes 30 seconds. Of course he should easily be going sub-25 but I take every completed run as a small victory against his teenage doppelgänger.


The Son wandered off to eat some of the fine free food & drink, which had been provided and laid out by the Northala parkrun community. He reclaimed his headphones from me (hung round my neck while he ran) and then waited for me in the car while I finished handing out finishing tokens to all the runners. 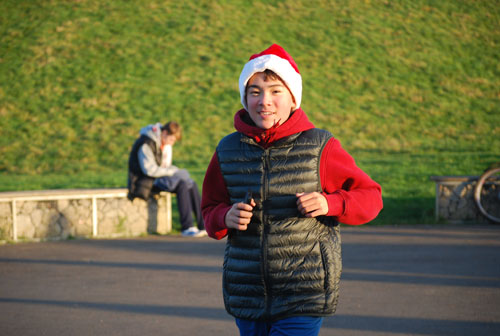 Not a mirage… The Son running!

I handed out the last token to finisher #197 (new course record!) and quickly grabbed some of the amazing Nepalese home-made pork and chicken dumplings. I say quickly because The Son was getting fed up of waiting for me in the car and was calling me every few minutes in a bid to get me back to the car so he could kickstart the rest of his Christmas Day.

We both had a great morning at Northala and their regular community were awesome. It was a popular destination for local parkrun tourists (the infamous Chris Cowell, first person to complete 100 different parkrun events, was there running his 287th parkrun) and it was great to see so many happy people from the parkrun community.