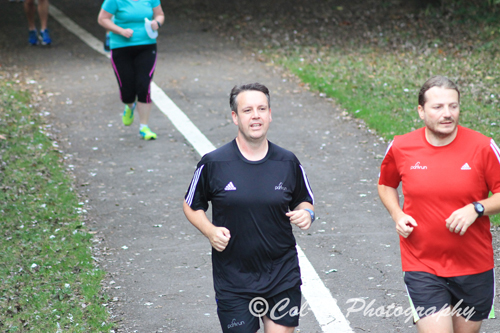 So far but so near, search for parking, discombobulated, and food by the canal.

A new phrase has entered our parkrun tourism lexicon following our trip to the Banbury parkrun inaugural: “It’s just not a Banbury”. On face value Banbury is well outside our wibbly wobbly timey wimey imposed 1 hour travel limit. However, it’s a speedy route on the A40 straight into the M40 so the location may be close to 70 miles away but it’s a swift slingshot on the motorway. We’ve  been to relatively nearby London parkruns that involve a longer and more complicated journey. Banbury parkrun seems to exist in a space-time continuum through a wormhole from Ealing.


It was a short walk / jog to the parkrun meeting point, which was by the finish funnel, and everyone was led across a bridge to the start area for the run briefing. We were soon off running and the field spread out around the twisty sections of the course. The course is described as two anti-clockwise laps but it threads around a wooded area before looping around the park past the canals. We had no idea where we were but were happily chatting as we ran round the park.


Our parkrun radar crashed again after the run as we tried to find the nominated café. We knew it was next to the canal but we remembered running by a canal several times but not where it was in the park in relation to the finish funnel. When in doubt – don’t ask and just wander in what you think is the right direction. When you know you’re lost – ask someone and the walk back the correct way.


The café offered a lovely discount to parkrunners and served breakfast so we sat with our bacon baguette while we watched the world pass by.