An early start for me and Other Dan to drive through London on route to visit the inaugural Dartford parkrun. I have been looking forward to this one for a while because I am a Kent lad; living in Welling and Bexleyheath during my younger years and then buying our first marital home with Mrs Dan in Dartford. My grandparents still live in Bexleyheath, my uncle lives in Dartford and my mum now lives in the relatively nearby Harvel. Other Dan also has family ties to Kent, lived and went to school in Kent and we first met some *mumble cough* 22 years ago in Kent*.

I’ll take this opportunity to throw in my two Rolling Stones anecdotes:

We were joined at Central Park by fellow Ealing Eagle Anthony, who lives Maidstone way, and I finally bumped into Graham who was my Scout leader when I lived with my mum in Bexleyheath. Graham has always been a keen runner but we have managed to miss each other at various races over the past two and a bit years. I didn’t even think of checking to see if he was planning to run at the Dartford parkrun inaugural and rather stupidly I forgot to get a photo of us together. Still, it was great to catch up with him and hopefully we will see each other again at Parliament Hill when the cross-country seasons starts.

The new parkrun takes place inside the lovely Central Park in Dartford and is easily accessible by public transport, has plenty of spots to secure a bike and there is car parking next to the Dartford Harriers Clubhouse or any of the nearby roads. There is a great course description on the ever excellent blog7t site via a description of trial run and also the Dartford parkrun inaugural event.

I was under strict orders to take things easy because I was meeting Mrs Dan in London for lunch and a movie so I ran with Anthony because he was also keeping things easy due to running the Wimbledon Half the next day. Other Dan is flying at the moment so he went off into the distance and was not seen until the finish line was crossed.

We enjoyed our visit back to Dartford and it was great to see Graham and Anthony again. The Kent parkrun scene is really blooming now and it’s great to see so many new parkrun events starting in the area.

* We recently caught up with friends when Other Dan got married a few weeks back and were told that if they were asked 22 years ago to pick two of us who would be out running every Saturday morning… then no-one would have named me and Other Dan. 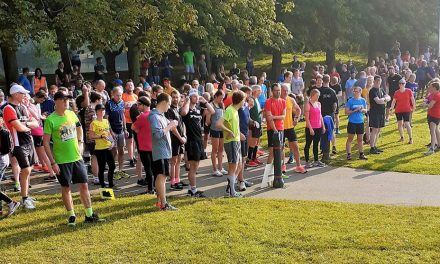