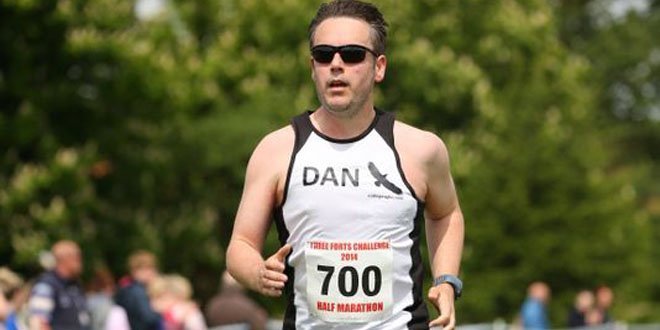 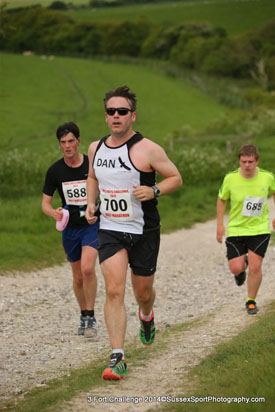 The Three Forts Challenge is an annual half marathon and 27 mile ‘marathon’ that starts in Worthing, West Sussex and takes in the amazing views from the South Downs. The event is organised by the local Rotary Clubs to raise funds for the Ferring Country Centre and other local charities.


Known as “The Tough One” the Three Forts Marathon (approximately 27.2 miles) includes a total of c. 3450 ft of climb with stiles and rough tracks underfoot. The route runs northwards from Hill Barn to Cissbury Ring, then eastwards towards Coombs then to Botolphs and the River Adur crossing. The route then goes to Devil’s Dyke and back to the River Adur. It continues on the South Downs Way to Chanctonbury Ring, where it swings south-west to Findon Park Farm. It stays on public bridleways to Cissbury Ring and back to Hill Barn.

The Half Marathon, with a total climb of c.1450 takes a shorter route to Steyning Bowl and picks up the last part of the Marathon route.

I was there to run the half marathon following a severe case of FOMO after some posts on the Eagles Facebook group. It also helped that I was in good shape and a testing race across the hills would keep my training on track.

Our band of intrepid Eagles were there to run either the half or the marathon – those running the marathon were racing or training for longer ultras – with the half runners there to enjoy the day and the views while putting in a good time for the challenging course.


The marathon runners set off first so we cheered them off from the race village and watched them disappear into the nearby hills. The race village contained a registration desk, a small building containing showers & toilets, outside portaloos,  a t-shirt stall, baggage drop (donations taken for charity), a catering van (bacon sandwich… nom nom), and a long line of massage tents.


It was finally time for the half runners to start and we were all charging across the field, around the corner, and facing the first hill. This is where you need to set your priorities as the charging hoard narrows down to the first steep hill, one that has technical sections and few passing points. If you’re desperate for a fast time and a good position then you need to make the effort at the start and then motor up the hill. I was in the middle of the pack and that meant slowing down with some unavoidable walking as some slower runners, or runners not confident on some of the technical sections, slowed down to a near crawl. This isn’t the time to be quietly British and politely wait for everyone in front – take the chances to overtake where possible and offer a gentle apology when you pass.


Pathway widened at the top of the hill and this is the first chance to take in some of the splendid view. A quick drink and jelly baby grab from the water station and it was downhill before the second steep hill, which then morphed into a longer gradual slope that went on for ever and ever. Runners were turning into walkers but I was determined to keep running even if that meant a soft shuffle.


It was a warm day and the conditions were taking their toll on the runners in both the half and the marathon. I would later hear of Eagles cracking in the heat on the marathon to record harsh positive splits. They all made it though, no matter how hard they found it. I decided to wear trail shoes, mostly to offer protection from stones hitting the front of the shoe and to give grip on the down hills. However, road shoes would have been fine as the trails were firm and not too rocky. 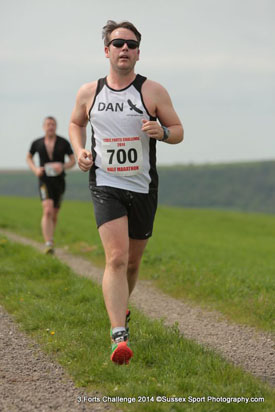 Our half route branched off from the marathon route and I gave silent thanks to the fact that I was not tackling 27 and a bit miles. Hills rolled, views stretched out from horizon to horizon, ample cheer and sustenance was available at the feed stations, and finally the course seemed to be going more down than up.


My race started here as I love a good downhill run. Arms out wide for balance and let gravity take me as fast as the legs will go. We were back past the first water station and onto the narrow, technical trail leading to the race village. I overtook a few more runners on this section as they went for (sensible) stability while I continued my free-falling downhill running. I could hear the finishing line announcements when I burst onto the road section and looped around to cross the finish line.


In the end I was the second Eagle to finish the half while Jennifer finished ahead as first woman. Great running. Next year I plan to return and complete the ‘marathon.