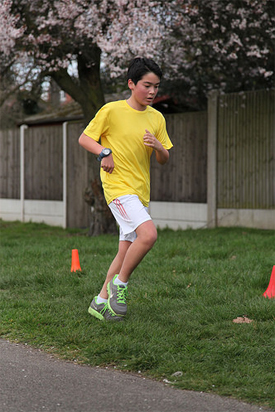 An altogether unexpected parkrun as Mrs Dan announced that she wanted to join me and The Son for her Gunnersbury parkrun début. She completed her one and only parkrun at Bushy parkrun in March 2013 and now wanted to tackle her second 5k just over a year later.

The Son went off running by himself from the start, mostly because he’s preparing for his school cross-country race, while I accompanied Mrs Dan. Unfortunately she isn’t able to run 5km without stopping, which in itself isn’t a problem, but she always starts off as though she can run that far.

I managed to get us on a run-walk strategy from the first km marker onwards and even managed to stop her dropping out as we reached the café. If either of us had any cash on us then I suspect she would have been straight inside.

We met The Son at the finish area to get our barcodes scanned before we all made our way to the café for some food and drink. I’m hopeful that Mrs Dan will return again in future weeks although she’s declared that she does not like running in the sun shine so will only be back when we have cloudy days.

Soaked on the Long Run