How not to prepare for a race…

On the Friday I ran a new PB at the Ealing Mile, Saturday morning saw a comeback PB at Gunnersbury parkrun and then that night I attended the Eagles Christmas Party. The hangover from the party would have been enough to ruin any race for me but I had to go and trash my legs as well.

Trent Park lies at the opposite end of the Piccadilly Line so an early meet at Acton Town saw a mostly sorry-looking bunch of Eagles trying to shake off various states of hangover. Those that had wisely stayed off the alcohol or left the party early… well.. I was somewhat jealous. Those that were still drunk or reeked of spirits… I was probably jealous as well. 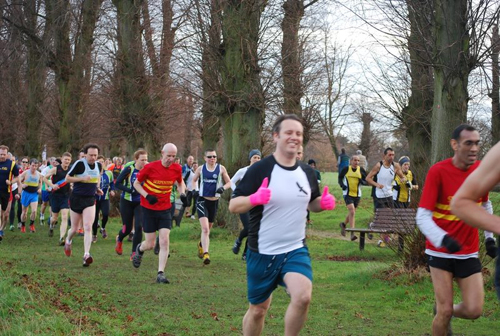 It was a shame because Trent Park looked a lovely location and had plenty to offer The Son, who once again took on photography and Nintendo DS duties. He was pleased to find a large modern café near the entrance so vanished just after I finished and later reported that their scrambled egg on toast was very tasty.

The course was also good fun and consisted of one small loop that started with a long downhill stretch and then back up past the start / finish area via a torturous uphill section. We then ran down through a muddy dip before the start of two larger loops that led back through the mud section and a horrible uphill finish. I loved the course but just could not click-through any running gears. Do not run with hangovers. It’s not cool.

There was some debate whether to go with spikes of train shoes for this one. The organisers had stated that small spikes could be worn but our pre-race recce revealed woodland path sections littered with stones pushed into the ground. I decided to go with my trail shoes, which I initially hated thanks to the muddy dip, but then enjoyed thanks to the stoney sections. Next year I might try the spikes (some did this year and said it was ok) but I will defiantly be staying sober the night before. 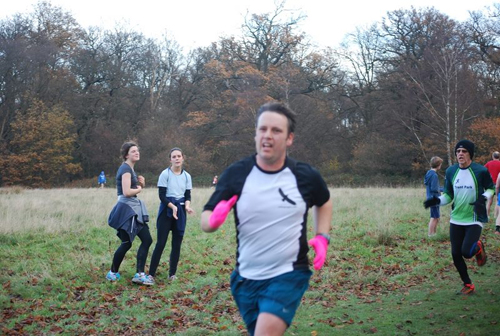 This was easily my least enjoyable race of the cross-country calendar so far – even more painful than the slog around Parliament Hill. Finishing next to last in my age class was probably about fair given my condition.

After some much needed Eagles food & drink, I made my way towards the café to meet The Son and begin the journey home. Unfortunately he managed to leave his umbrella behind (he did the same at the ESM Summer League fixture) so I sent him running back to get it. I sat down on a bench and waited – there was no way that I was running again!