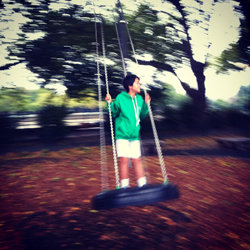 Time for another inaugural parkrun in West London as The Son was dragged out of bed to accompany me and Other Dan to Fulham Palace parkrun. I am tapering in preparation for the Abingdon Marathon tomorrow so today was all about the slow run.

We drove to Bishop’s Park and parked in the pay-and-display section along Bishop’s Avenue. Parking is a wallet emptying £2.20 per hour with parking restrictions starting at 9am. The close proximity to Craven Cottage means that the street imposes a 1 hour maximum stay on match days, which also starts from 9am. I checked online and Fulham were not playing today but each ticket machine has a list of upcoming home fixtures.

There are plenty of public transport routes to Bishop’s Park and I probably would have cycled by the river if I didn’t have to get The Son home for other activities. If you are driving then beware the time stealing payment machines – restrictions start from 9am but if you pay at 8:30am then your 1 hour on the ticket starts immediately and would expire at 9:30am. There was a queue of canny parkrunners at 8:50am, including blog7t, who arrived early but returned to get their ticket just before the run briefing started.

abradypus spotted us and came over to say hello as The Son played on the swing in the toddlers play park. He did not seem too concerned about the ‘designed for children 8 years and under’ signs but then he spotted the bigger swing in the distance so moved on. It was nice to see a friendly face once again as abradypus was marshaling and I hope her injury clears up and allows some running soon.

The run briefing was held outside the entrance to Fulham Palace  before everyone was led to the start line in Bishop’s Park. I have been through the park several times before but I did not know about Fulham Palace. A quick visit to wikipedia tells me:

The course is a two and a bit anti-clockwise loop of Bishop’s Park run on tarmac paths until a brief section at the end where the finish funnel is staked out on the grass. We passed abradypus at the left turn by the Craven Cottage wall and this prompted a discussion between me and The Son about Fulham FC and the recent removal on the Michael Jackson statue.

I am tapering and The Son did not want to run fast so we chatted and ran around the course with the run leaders lapping us by the river. It’s a flat tarmac route, which would mean a reasonably fast course but there are some twisty-turny sections so probably not a PB course.