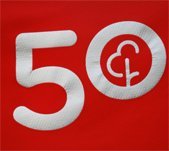 Not at Plymvalley parkrun, Other Dan gets there first, double chicked  and another comeback PB.

The Son was scheduled to run at the Aldershot Road Relay today so I planned an early start for a run at Plymvalley parkrun before taking him onto his race. Unfortunately he came down with a cold on Thursday and was off school for two days so he was banned from competing and accompanying me to Gunnersbury.

I didn’t arrange anything with Other Dan this week but saw him and his family walking to Gunnersbury so gave them a lift for the remainder of their journey. We arrived as the run briefing started, which we thought was a bit early this week but that suddenly made sense because the latest batch of parkrun shirts had arrived.

We’ve both been waiting for our 50 club tee for a while and have been joking with each other for a couple of months about who would get to 50 first. Thanks to Other Dan tackling the adidas Thunder Run and then moving house, I ran my 50th parkrun  4 weeks before him but we ended up getting our shirts on the same day. Except his name was called out before me. Cue much jesting and laughing as Other Dan did get his shirt before me.

I decided to target a sub-23 minute finish this week and went off way too hard for the first km before throwing everything into hanging on for the rest of the run. I was chicked just after the down slope following half-way only for the speedy woman to high-five her family and stop to give her daughter a hug. She then chicked me again – double chicked!

The last km saw me make two brief stops as I tried to stretch out a stitch but I did manage to set another comeback PB with a sub-23 minute run. I might even target my Gunnersbury PB (0:21:57) in a month or two.

We convened at the café afterwards as usual and Other Dan took great delight in showing off his 50 shirt (that he got before me!) and laughing at my tale of being double chicked.