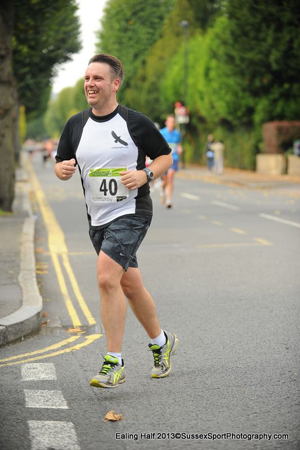 My favourite race of 2013 returned for its second outing and my local community stepped out in force once again to support. It was was a family affair as I was running the half while Mrs Dan volunteered as a marshal on the course and The Son raced in the mini mile.

Mrs Dan was apprehensive about volunteering as she had never done anything like this before. She has always jokingly referred to my running as being part of a weird cult so it was nice to get her involved and see how welcoming the running community is.

I drove Mrs Dan to her volunteer meeting centre before the roads started to close and wished her well. This left me and The Son making our way down to the race village at Lammas Park where we collected his race pack for the mini mile. Thankfully there was no queue as we were nice and early, a little later on there was a fairly big queue of adults and kids collecting mini mile race numbers.

The Son queued up for a hot chocolate from the drinks van while I sorted out pinning his race number onto his shirt. I then joined my fellow Eagles for a group photograph before dropping my bag off at the baggage tent.

We had a small problem as the mini mile runners were not given a way to leave bags anywhere but it makes sense that the organisers would expect the kids to be accompanised by a responsible adult. The Son was probably one of the oldest mini mile racers, he was certainly at the very top of the allowed age entries, and is pretty much independent these days. The team at the baggae tent were fantastic though and gave The Son a special label for his bag and allow us to store our bags together.

There was a warm-up taking place but I was too busy making sure that The Son was ok so I didn’t join in this year. I brought along a silver space blanket with me, which The Son used to keep himself warm as I headed to the start line. Xempo were providing a wide range of pacers again and I placed myself between the 1:50 & 2:00 groups (from memory there were pacers at 1:30, 1:40, 1:50, 2:00, 2:15 & 2:30). The Son wished me good luck as the race started and I was off running while he returned to the finish line area for the start of the mini mile.

Miles 1-2: Reasonably crowded with runners but plenty of space to hit my pace. The 1:50 pacing group are just in front of me but then gradually begin to pull away. Spot Mrs Dan at her marshal point so veer over to give a high five (I was later told off for not stopping to give a kiss… not sure that’s part of the standard marshal thank you!).

Miles 2-4: Up the first serious slope and still feeling good. That’s until a nearby runner clears their nose to the side and splatters snot down my leg. Spotted abradypus as a marshal and gave a wave & hello.

Miles 4-6: Lots of runners using the shrubbery in Pitshanger Park to hide their toilet breaks. The next big slope and runners chuckle as a local resident shouts “JESUS LOVES YOU!” over and over. Further on we pass residents holding a barbeque in the street while cheering on the runners.

Miles 6-8: The lead runners begin to pass in the opposite direction to cheers from other runners.

Miles 8-10: The steepest slopes are conquered and a great sight to see runners streaming in 3 directions. A great new section of the course.

Miles 10-12: Teeth gritted and legs beginning to ache… a woman running in front of me spends 1 mile waving her arms about madly and shouting to the crowds to get lots of cheers. Spot abradypus again and this time I go for the high five as I run past.

Miles 12-13.1: Twisty roads and then into the park as I pass the guy who earlier blew snot down my leg. He then goes on to sprint past me in the last 400m. I wisely let him go to snot someone else. 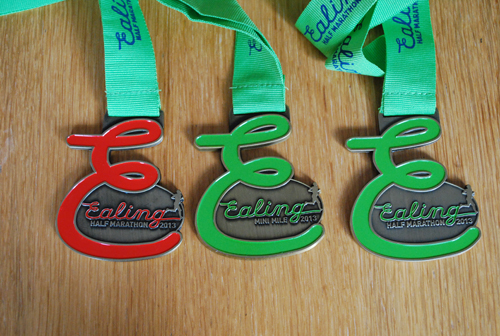 While I was running the half, The Son lined up in the inaugural mini mile. He finished a respectable 12th place out of 177 entrants with a time of  0:7:05. Thankfully he did not beat my mile best otherwise I would never have heard the last of it. He received a rather spiffing mini mile medal for his run, which was a lovely touch by the event organisers.

Meanwhile Mrs Dan was busy cheering on the runners at her marshal point and speaking to some of the local residents as they asked what time the roads were opening. She was based somewhere around the 2 mile mark so it did not take long for all the runners to pass and she was allowed to stand down once ‘tail end Charlie’ (in this case the Ealing Half car) passed by. After all her worries about not knowing what to do, she loved being a marshal and cheering on all the runners.

Mrs Dan was originally planning to walk home but decided to walk into Ealing to meet up with us at the race village. However, she managed to confuse Walpole Park with Lammas Park and wondered where everyone was because Walpole Park was empty. Instead she took the train home and I gently teased her later by pointing out the course map folded up in her pocket that was part of her volunteer pack.

Last year I put in a burst of speed as I entered the last 400m and then a sprint finish as I circled through to the finishing straight. This year I was treating the race as a 80-90% effort training run, which mean I was overtaken in the final stretch. I didn’t really mind as I was busy trying to spot The Son, who told me he would wait by the finish line based on my expected 1:50-1:55 finish time. 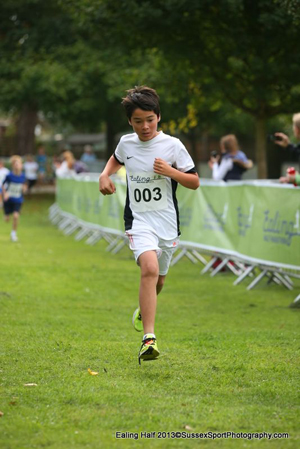 I could not see him in the crowd so I grabbed my stuff from the baggage tent and quickly put on some warm layers. I tried phoning him a few times (no answer) so I wandered up and down the finish funnel crowds trying to spot him. Again, no sign of him and no answer from his phone so I started to wonder where he had got to. I eventually spotted him standing at the end of the busy exit funnel, where runners were spewing out into the park clasping their medals.

The Son was was bordering on a DEFCON 5 mood so I spent some time calming him down as he explained that he had lost his mobile phone and did not know how to contact me. I opened up his rucksack and there was his mobile with all the missed calls. Next time we’ll be very specific about a meeting point as our interpretations of the ‘finish line’ were completely different.

All three of us had a truly great day either running or helping at the Ealing Half. Mrs Dan was amazed at how many runners shouted out “thank you marshal!” to her and asked me if this is normal. She could not believe how friendly and grateful the runners were, how much fun she had cheering & clapping and she will definitely be volunteering again next year. Each volunteer received a distinctive red Ealing Half medal, which she loved, and also a free spot in the 2014 race. There’s no chance of her ever taking on the challenge of running a half and I would not dream of trying to claim her free spot.

The Ealing Half remains my favourite race and I love that the three of us were all able to contribute in some way. The organisation is superb and great care is taken to include the local community.