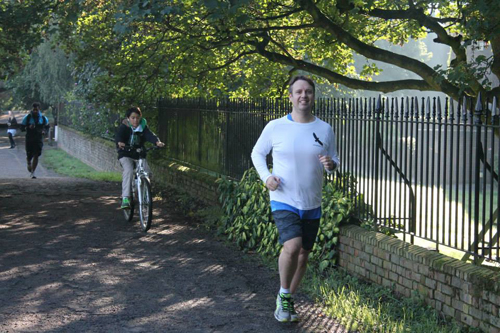 There are plenty of these types of friendly training runs all over the place and they are the unsung heroes of the spring marathon training schedule as you get to churn out the long miles with friendly runners with the support of marshals and drink stations manned by volunteers.

However, there doesn’t seem to be many similar events for the autumn marathon season so Ealing Eagles decided to set one up and invite other local and linked running clubs. I am meant to be deep into my marathon training (ha!) so this was a great opportunity for me to get a 20 miler banked into my legs.

I had booked this into the family diary several weeks ago but Mrs Dan double booked herself without realising, to a memorial visit on the anniversary of the death of a close friend, so I offered to take The Son and his bike with me. I was wary about taking him on such a long run, especially as he was meant to be competing in a road relay competition in the afternoon, but ultimately there was little choice so he was stuck with me for the morning.

The route was an out and back run from Kew Bridge to Hampton Court, utilising the Thames towpath. The Kew Cricket club was hired as a central base and runners invited to register for free in advance by email so runner numbers could be tracked. On the morning each runner registered and pinned a small piece of black & white fabric to their top for identification purposes.

I didn’t want The Son blocking off the path with his bike so we started at the back and I told him to hold back until the runners started to spread out. The towpath isn’t very wide at the start but with the faster runners vanishing into the distance, The Son zoomed off as well. 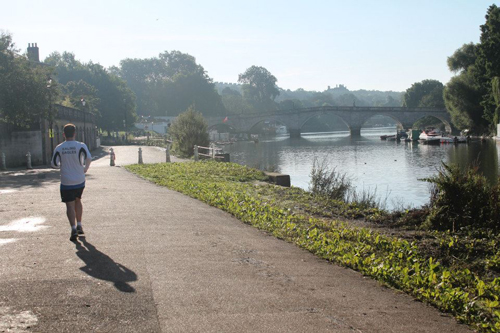 The towpath was getting a lot of use as a series of races were taking place so other runners sped towards us and then looped back to pass us further down the route. Richmond was soon passed with a friendly wave to our wonderful volunteer marshals and then the first water station was in sight. The Son seemed to have disappeared so I stopped for a drink and a handful of jelly babies before heading off again

At some point I passed Jake Humphrey, who was out for a walk with his family, and The Son was happy to exchange a hello with him as well when he cycled along. At Kingston we crossed the bridge so The Son waited for me to carry his bike up the steps. The second drinks station was on the other wide of the bridge and The Son decided to stop there to take a rest and wait for me to return. I could see that he was getting tired so I was all in favour of him taking some time out.

I was now running with a guy from Metros so it was nice to have someone to chat to as my legs began to ache. We reached the turning point at Hampton Court and then I was back to help The Son take his bike back down the steps.

The return journey was only notable for my legs hurting and The Son needing an emergency toilet break at Richmond. He was getting visibly annoyed with everything around him due to tiredness and I detected a shift into DEFCON 4 in his mood. Thankfully we finally reached the finish line and we were able to graze on the cakes and snacks, that were all waiting in the cricket clubhouse.

The Son was still in bit of a “I AM NOT TIRED!!!!” mood and wanted to get going so our post-run snacking was reduced to whatever I could quickly grab. It was a great event with great support from friendly Eagle volunteers. Next year I intend to fill my marathon boots in the spring so hopefully I can help out on the volunteering side.