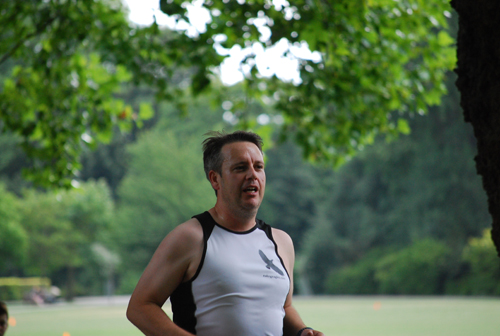 Where did time fly this summer? Could this really be the last summer league fixture of the season?

I joined a small convoy of Eagle laden cars making their way to Battersea Park. Our hosts for the day were Serpentine and they were busy setting up as all the competing clubs began to stake out their respective bases. The Son was busy eyeing up a small fairground close to the finish area but unfortunately for him everything was closed.

First up was the 10k so I was off running while The Son took on photographer duties. I started off reasonably slowly and watched lots of familiar faces gradually move into the distance as the course looped around inside the park. The pungent smell of manure on a nearby flowerbed was the catalyst for my increase in speed and I began to reel runners in as we turned into the first of three passes down the long finish straight

The lead runners began to lap me as I approached the half-way point of my second lap so I had the opportunity to cheer on a few Eagles before I completed my second lap and then it was all about passing as many runners as possible. I set my sights on the various club vests in front of me and overtook a few more before a last burst of speed on the finish straight saw another two runners overtaken.

I did not manage a seasons best 10k time but for the first race this summer, I felt comfortable and was able to get the legs running at a faster pace. I probably could have put the hammer down a bit more to be honest and got nearer to a sub-50 10k once again but at least I know that my fitness is now returning.

Next up was the tenderfoot race where I had primed The Son to put a shift in so he scored well for the Eagles.  He had already secured victory in his age group by virtue of no other boy recording two earlier scores and my worry was that he would coast this one. Thankfully I was proved wrong as The Son threw everything into his run to take 5th place in the boys race. 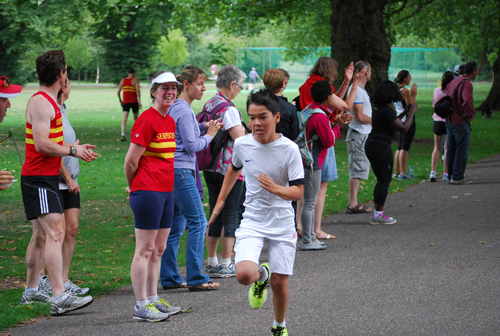 At this point I was busy refuelling from the wonderful selection of snacks as provided by the host club. I noticed The Son was busy foraging through the large bowl of crisps, which I could not begrudge following his strong race.

The final event of the day, as usual, was the age weighted 400m team relays and this time around they were 400m relays rather than some of the *cough* somewhat shorter *cough* relay courses from earlier in the summer. I must admit to preferring the earlier shorter courses! Taking on a 400m race with 10k race weary legs following a section of snacks & cakes…. not great!

We were in the same team for a change and The Son put in a swift leg to set the team up in a reasonable position. The key to success in the relays is not necessarily taking first place, which we did not do, but in balancing a range of runners to finish as high up as possible. I cannot remember our exact finishing position but with a male over 60, a female over 40, three kids and me… there were bonus points all over the place. 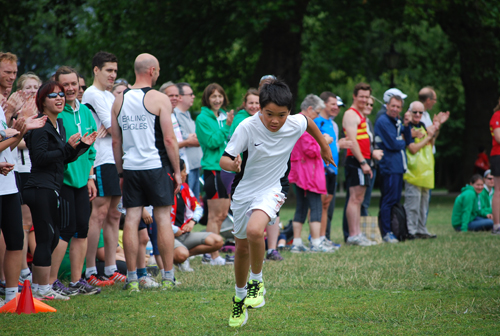 The final relay race brought about the highlight of the 2013 summer league competition and one of the most heart warming runs I have been privileged to witness. A couple of very young Eaglets wanted to take part in the relays so in the last race, we actually had a time of 8 runners even though it was only the first 6 competing in the race.

The final leg, of the final race, of the final summer league meet, saw a 2-year-old Eaglet run 400m by himself with a supportive crowd, made up of runners from all the clubs, cheering him on the entire way. The Eaglet crossed the line with a beaming smile and threw his arms out wide as he ran into a proud embrace from his dad. It was only fitting that the last photo I took would capture the proud look from such a young fantastic runner. My favourite image from the summer appears at the end of the Eagles race report. 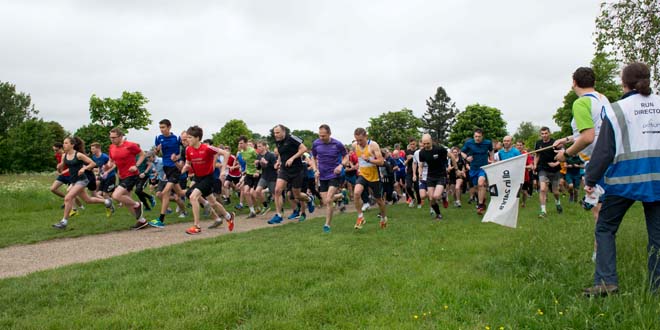