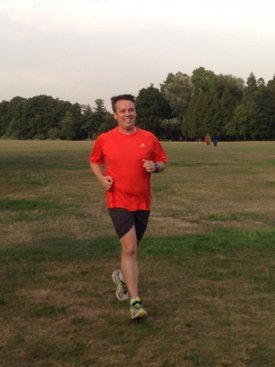 Osterley parkrun begins on Saturday 31st August and Ealing Eagles were invited to run at the trial event so the volunteers could practice their roles and the runners could give feedback on the location and route. Trial events are not officially timed as a parkrun but you do get the bonus of a timed run on a parkrun course that you can log as a freedom run.

I was a bit stressed about getting to Osterley Park on time as I sat in the rush hour traffic filtering down towards the Chiswick roundabout while cursing myself for taking such a stupid route given the time of day. However, I hit a clear bit of road and pulled into the grounds with 5 minutes to spare.

The majority of volunteers were all familiar faces from both Gunnersbury parkrun and Ealing Eagles so after a brief run brief, a small group of runners set off and soon began to spread out. The previous night had been the weekly track session so I was in no state to run fast.

The start is close to the manor house and follows the main path round past the café and down to the bottom gate on a rough ground / part gravel roadway. We exited a marshaled gate out onto another rough roadway that runs at the bottom of the estate, which must still be part of the estate since no parkrun route is allowed to run across or through public roadway. This section had some real dips and hollows so will become quite wet and muddy in winter.

A sharp right turn through a marshaled narrow gate led to a woodland area with overhanging tree branches and some gnarly tree roots. Particular care needed to ensure that no whomping willow style attacks bring you down before bursting out onto a grass path, which leads directly back to the mansion-house. Then it’s a case of repeating the same for another two laps.

I enjoyed the varied terrain as it’s certainly a very playful course. The bottom pathway will need care in the winter when puddles form in the ruts while the woodland paths offer opportunity to trip if you’re not paying attention.