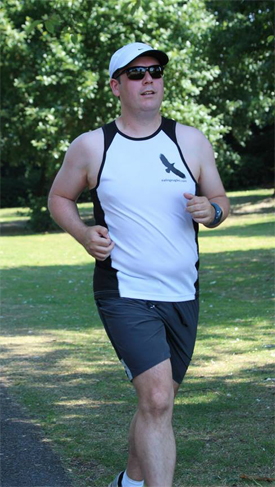 The third summer league fixture of the year was a local affair as Ealing Southall & Middlesex AC were our gracious hosts for the day and I headed down to Perivale Park with The Son to meet up with the other Eagle runners and cheer squad.

We were greeted with bright sunshine and a wall of unrelenting heat so we convened in the shade of helpfully placed tree as all the runners gradually arrived. The majority of summer league races start reasonably early in the morning but the ESM event does not start until 11am, which typically had to fall on one of the hottest days of the year.

I had no idea how to pace myself for the hot conditions but I knew that it had to be slower than normal so I positioned myself near the back of the field and set off at a gentle pace. Things felt good as the course ran through the park and the race leaders slipped into the distance. We then progressed out onto the road side pathway and this is where the sun started to beat down on me as the heat bounced off the pavement.

My pace began to falter as the first lap came to an end but I was thankful for the water station, where I made a pit stop for a drink and an impromptu mini shower as I poured water over my head. The Son was nearby taking pictures so I put on my best fake smile and gave him a wave as I passed by.

The second and final lap beat me into a submission and I swapped to a walk-run strategy so I could take advantage of a few shady stretches. Thankfully I was not near any other male runners so there was no need for me to race through into a sprint finish. However, I did pick up the pace for the last 100m only to be chicked just before the finish line.

The course and oppressive heat had beaten me to a pulp. I collapsed as gracefully as possible into the shade by our baggage area and helped myself to the most gloriously refreshing cup of Coke that I had ever tasted in my life. I had the bright idea of buying some bags of ice at Tesco and I had poured them out into a travel sized freezer bag – definitely one to remember for the future as the ice worked in the drink and held to my face. 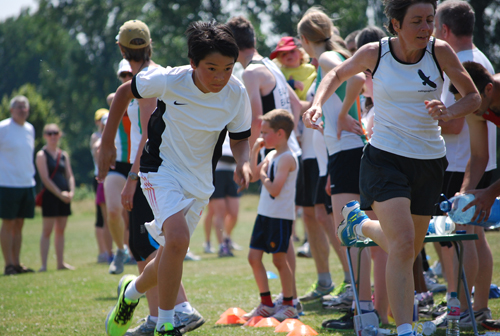 I regained my composure to cheer The Son as he competed in the tenderfoot race. I think he took my heat warnings a bit too seriously as he slowly jogged around the course with the faster boys steaming out far ahead. I thought he might be saving himself for a glorious negative split but I was clearly wrong and he stuck to the same sedate pace all the way round. I couldn’t exactly berate him for this following my struggle around the 5 mile course.

As always we finished off the days competition with the team relays, with The Son promoted to the full B team this week. I sat out the sprints this time, mostly in a bid to finally banish my leg strain, so took up my customary place near the first bend so I could take pictures of each handover and the race finish.

The serious ESM sprinters were out in force for the men’s A team race and rounded off the victory with a choreographed finishing routine. The Eagles men managed to hold their own for the first 2 laps but were then blown away by the sprinting strength of depth wheeled out by ESM. However, we took the major points thanks to the *ahem* more senior sprinter in our team handing some much-needed bonus points. 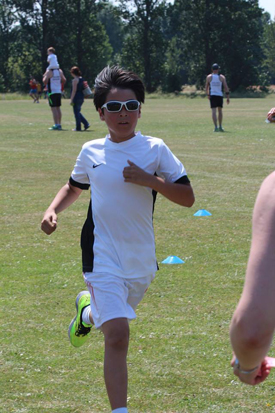 The Son raced around serenely and helped the B team to a morale boosting points win as well. Top stuff.

A great days racing was had by all and I loved that we’re still introducing new Eagles to the wonders of summer league. The distances may seem daunting, especially with the normal worry that every is going to be fast, but it’s great to see everyone approaching the finish line with a big grin on their face while those already finished give a great cheer.

We extend our thanks to ESM for hosting the races and making the day so enjoyable. I set myself a 5 mile PB (ok… it’s my first 5 mile race but a PB is a PB) and The Son loved the relays. We won’t be able to make the next fixture due to a clash with the Anniversary Run but we’ll definitely be at the final fixture at Battersea Park.