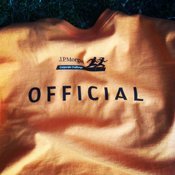 The J.P. Morgan Corporate Challenge is a series of worldwide corporate running races organised through the financial company J.P. Morgan. London were hosts to 2 consecutive nights of racing at Battersea Park for what is basically a company schmooze-fest for well-known corporates with some seriously speedy runners at the front through to first timers running at the back.

Various Eagles were providing marshals across the 2 races and I helped at the second night on a balmy London evening with The Son watching on from the sidelines. We were assisting at the finish line as ‘spotters’ and I had the incredibly important job of identifying the second lady finisher and then taking down her details. The event is chip timed so our role was really just as a backup to the chip results and verification then everything matched at the end.

The organisers provided us with a packed lunch, which we ate while our team leader gave a briefing on what to expect. We then lined up just past the finishing line, making sure not to be in shot for the race photographers grabbing pictures of the race winners bursting through the tape, and waited as the runners began to appear in the distance.

The leading men sprinted through, directed to their left, and it was soon time for the first ladies to be directed to their right. I caught my assigned finisher as she passed through into the finishing area but had to wait for her to catch her breath. I was stuck in the limbo period of needing to jot down her information but waiting for the opportune moment for her to be in a fit state to talk.

My main work was complete so the next hour and a bit were spent cheering on the rest of the finishers and making sure that they carried on walking through the finish area so that the steady stream of runners did not run into them. There were several instances of people vomiting across the side barriers after their finish, mainly the faster runners who had really been going for it. I suspect the warm weather in conjunction with some earlier alcohol consumption may have contributed to their chundering. One woman had remarkably red wine coloured liquid spewing out everywhere.

It looks like a nice event in the corporate calendar and we walked past the corporate hospitality tents on our way out, where some serious eating and drinking was under-way. There must be kudos for the winning companies while the larger teams engage in team bonding as many are probably running their first organised event.