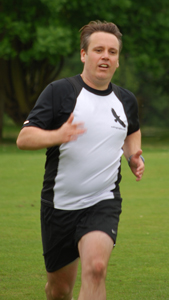 Round two of summer league and we headed over to Harrow to be looked after by the warm and friendly Metros Running Club. Our car share scheme from Ealing meant small groups of Eagles arrived at the same time to set-up base camp alongside the other clubs. The Son was raring to go again for the tenderfoot race and the relays plus act as photographer for the adults race.

My race started on the tarmac path inside the path on a narrow stretch so some care was needed to try to place in a suitable spot where I would not be in the way of faster runners. We then followed the path through the park, across a narrow bridge, and then out onto the nearby streets where the field began to naturally spread.

I had no real race aspirations today so went out treating this like a reasonably fast paced training run. Unfortunately my running fitness is still low so while my mind is willing to run at 45 minute 10k pace, my legs are nowhere near ready for that kind of sustained effort.

The route continued around the nearby streets, where I encountered the major hill / slope so I tucked in behind a couple of runners in an attempt to shelter from the breeze. I then stuck close to the same guys for the majority of the race and used them as my touchstone for pacing. At some stage they pulled ahead but I knew that I held enough in reserve to catch them at the end.

The first 2 runners lapped me just before their final turn back into the park and I continued on the last loop, but now catching up and passing some of the runners who had gone out too fast. The Son was busy snapping away with my camera and with a final wave I steadily increased my pace to overtake a few more runners and sprinted through the park for an official finish time of 52 minutes and 43 seconds. 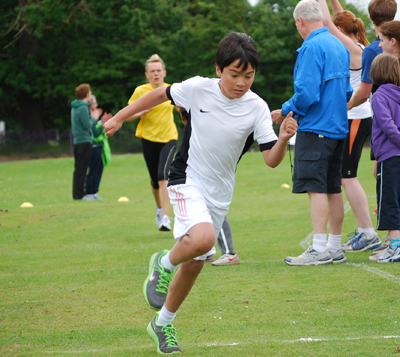 I wrapped myself in some warm clothes and swiftly grazed my way through the fantastic food tent before hustling The Son over to the start of the tenderfoot race. He was primed and raring to go and set off at a fair old rate of knots as the varied age group youngsters sped off through the park. I set myself up with the camera to capture some pictures as he ran past on his second lap.

The Son was wiped out as he sprinted through the finish line and looked exhausted as he stopped to get his breath back. His verdict – a much faster race this time as the older kids went off much harder and he tried to keep as close as possible.

Next up were the 400(ish)m relays so time to cheer on the men & women as the A teams ran for glory. The Eagle men took the honours in their race while the women took  spirited third place.

I ran in the B team and this week we finished first while The Son joined another B team to out sprint another Eagle adult. However, we didn’t take the highest points from winning the relays as the older and younger runners scored bonus points for their clubs. The Son may see himself upgraded to the full B team next time based on his speed and attached bonus points.

I have tried to understand the permutations of the relay scoring but you seem to need a 1st class degree in Mathematics with honours from Oxford University, a master’s degree in unicorn grooming, and a PhD in rainbow knitting before you’ll get anyway near forming the best possible team to score the most points.

We had another great week of summer league racing with some fine hosting by Metros. The Son remains on his one boy quest to take the 11-year-old points title and is well on his way with a total of 202 points in his age group after the first two races. He seems to be out in the lead but that’s because he was the only Y5 boy running this week.

Next up is the local summer league fixture hosted by ESM.