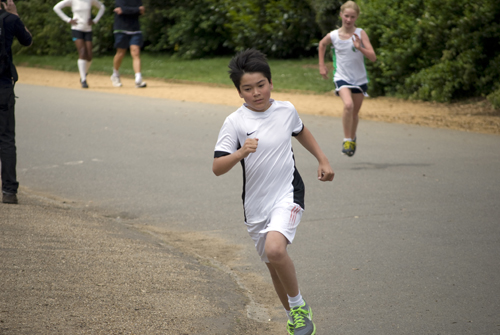 You know that summer has officially started when summer league starts and a buoyant coach load of Eagles and Eaglets made their way to Dulwich Park for the first fixture of 2013. Our hosts for the day were Dulwich Park Runners and they were very welcoming as we strolled into park nice and early to set up our camp.

Summer league consists of 10k or 5m fun and friendly races, which are contested by 7 running clubs, with tenderfoot races for the kids and mixed 400m(ish) relays that also contribute to the clubs score. Each host club provides food and drink for everyone and it’s a great way to compete and make new running friends at the same time. The scoring rules are probably very complicated, so I have made no attempt to try and fully understand them, but every adult runner scores so the races are truly open to all abilities. There are bonus points of offer for different age grades so there is plenty of scope to score well no matter how young or old you are.

The Son was itching to make his Eagles début in the tenderfoot race but first it was the 10k club members race so The Son kept himself taking pictures of the Eagles team as we made our way to the start line. He retained his photographer role as the race started and the runners snaked their way through the park and out onto the surrounding pavement. The route consisted of 3 laps, mostly on the public roads around the park, but with a section back into the part where we finally finished.

I am not in the best running shape at the moment as I have hardly been training as I nurse my leg back from injury but with the knowledge that all results count, I powered around as fast as my reduced fitness would allow. I was saving a bit of energy for a sprint finish with the aim to try to take down any runners ahead of me but as I turned into the park for the last time, I realised that the only runner ahead was an Eagle and the runner behind was also an Eagle. No glory for me at the end and I finished in a somewhat slow (by my standards) 51 minutes and 41 seconds.

I cheered in a few more finishers as I gathered my breath before making my way to the host area where I grazed on the fine spread of bagels and cakes laid out for everyone. I made sure not to eat too much as the relays would follow later in the day and I also wanted to cheer The Son through the tenderfoot race. 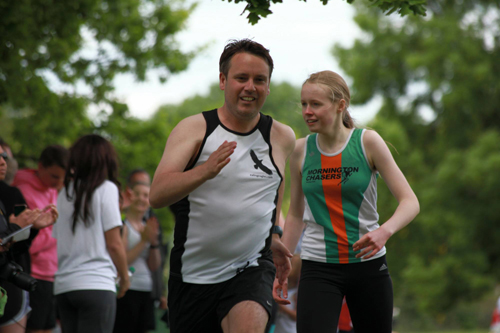 The tenderfoot race is open to 7 through to 15 year olds but again the point scoring is made fair through individual year categories and bonus point schemes. I believe that the top 3 boys & girls from each club score for the team but there is no limit on total number of runners per club. I took over photographer duties and cheered The Son as all the kids sprinted off into the distance. I made my way to the finish area where a bunch of Eagles cheered in all the Eaglet racers plus some of the other finishers. The Son had also been saving energy for the glory finish and sprinted off to overtake a girl in the final stretch.

There was a non-scoring 400m run / race for the younger kids and they loved racing around 400m being chased by someone in an emu costume and also a pantomime horse. There were chocolate medals and certificates for all the young kids and it looked like they had a great time.

The relays were the last event of the day and first up were the men’s A teams consisting of 6 runners and then the women’s A teams consisting of 4 runners. These were great to watch as everyone cheered on their respective teams. The B races consisted of mixed teams and I helped make up the numbers in the final relay as we entered a second non-scoring team so the kids could take part. I have to admit that The Son could probably beat me in a 400m race and he went sprinting off when it was his lap. Thankfully we were on the same team and I had the honour of bringing our team home in last place. The result did not matter and it was a really enjoyable end to the day.

A ceremony was held at the end to hand out trophies and medals for the 2012 league and The Son was especially happy to find out that there are 1st, 2nd, and 3rd prizes for each tenderfoot class. He has his eye firmly on the 11 year old classification trophy for this year and intends to race at all the summer league races.

Our thanks go out to Dulwich Park Racers who hosted a brilliant fixture.