Last year I missed school sports day due to the late notice of the event and not being able to take the day off work at such short notice. Unfortunately I missed The Son retaining his title of ‘Fastest Boy’ as he swept the 100m again with all his class mates chanting his name and running to congratulate him at the finish.

The Son swapped school for the summer term so he was nervous about where he would fit into the new running hierarchy. I had made sure to put sports day into my diary straight away and book the day off so would be there to cheer him on this time.

We arrived bright and early at Perivale Park Athletics Track and The Son quickly ran off to join his house while we grabbed a small area for our picnic blanket and camping chair. The morning saw The Son safely make his way through the 100m & 200m heats to secure his place in the afternoon finals. He also competed in the discus and long jump but did not really seem that interested in either of them, his focus was very much on the track.

His last even before lunch was the 800m and he had taken the wise decision to jog round and not trying to seriously compete. It was an open rack so there was little chance that he would be able to challenge the older boys from years 7 & 8.

We also watched some of the other 100m & 200m heats and there is always one fool that creates a scene. The clear leader of one of the year 8 100m heats decided that it was not good enough to win, he had to start his victory celebrations well before the finish line. Even that wasn’t enough so he decided to run backwards across the finish line. Except his feet tangled up and he fell just before crossing the line. All the watching parents tried not to laugh too much as all the runners ran past him. I spotted him later in the day with a sling on his shoulder but I suspect it was damage to his pride than anything physical that was causing his pain.

All the children joined their parents for lunch, with picnic areas laid out at one end of the track. I enjoyed looking round to see what kind of food the parents have packed for their picnic. Some, like us, had chosen the easy option of sandwiches and other similar food items from popular supermarkets. A handful had obviously bought their food on the way to sports day and were eating out of Costa bags. There were also a few with their fully laden hampers enjoying glasses of wine of champagne with their lunch.

The afternoon began with the shorter distance finals for the younger children and it was soon time for The Son to compete in his 100m final. This was his big race and the one he was desperate to win. The lane draw saw his 2 main rivals next to him and the race looked close for the first 70m but The Son began to pull clear and took the cheers as he crossed the finish line in first place. 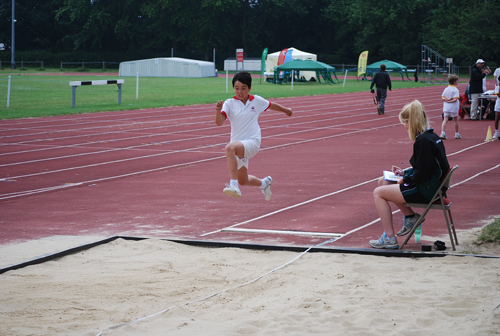 The finals continued and moved onto 200m and we strained to make out The Son sprinting towards us. The heavens had opened at this point and he had to battle the elements as well as all the other runners. This time he was well clear and even had time for a victory wave as he crossed the line – something I will have to chat to him about! He had been really nervous about sports day this year so it meant a lot to him in taking both the 100m & 200m titles for his year group.

We really enjoyed spectating for the day although next year we might skip the morning heats and arrive in time for lunch and then the afternoon finals. There was a lot of time just standing around through the morning while The Son was not competing.

The day ended with the 100m relays with The Son anchoring the glory leg in a bid to bring the team home first. Unfortunately it looked like no-one had practiced baton changes in preparation, in fact they only selected the teams just before the race, so his house came in 3rd or 4th. It was quite difficult to judge the winners because they had mixed age groups competing at the same time to utilise all the lanes.

It was a nice day out and a successful day as far as The Son was concerned. There were some seriously fast kids in the older races so it will be interesting to see how his running develops over the next 2 years. The Son is eager to train with Perivale Panthers at the running track so I will look into our schedule to see if this is possible.