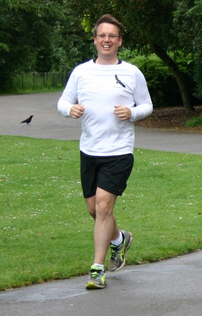 My slowest ever parkrun and could not be happier. A special parkrun as we accompanied Kelvin on his 50th parkrun on his birthday.

A small pack of slow runners meandered down from the start and we were all in good spirits as the field rapidly sprinted away from us. It was slightly odd travelling so slowly and at one point The Son was walking beside me with his hot chocolate in hand.

I remained at the back of the field chatting away to John, who regularly ambles around slowly thanks to knee and hip replacements. His real forte is speed walking but enjoys the community of parkrun so makes it his run of the week.

Kelvin had the honour of passing into the finishing funnel before the pack of runners behind him and I followed shortly afterwards as John encouraged a woman to the finish just in front of us. I would have been the last finisher except that we have a tail runner so he let me cross the line as the second to last finisher.

The café beckoned and we joined everyone for a warm drink and birthday snacks.