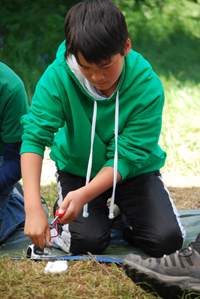 No running for me at the moment as I am resting my leg once again to finally try to shake the remnants of the muscle strain on my right leg. No parkrun for me this weekend as I took The Son away on the school parent association father-son camping trip.

I was a member of the Scout movement from 9 to 18 years old but The Son has not had the opportunity to go camping like  did in my younger days so he was really looking forward to our weekend away. I spent the weeks leading up to the trip buying our essentials; tent, sleeping bags, torches, camping chairs, plates and eating utensils and I also volunteered to help out on the organising committee in a bid to meet some of the other dads.

I took the Friday off from work to pack up my car and meet a few other helpers to load up on some of the shared items. I had all the gas canisters stacked in the back before driving to our camp site just outside Basingstoke. We had a camping area booked for two nights and as the first to arrive, I picked a spot to begin erecting our tent. The other helps began to arrive and we all picked prime spots and got our tents sorted before setting up the cooking gazebo and marquee for the foot and drink area.

The parents and boys began to arrive, with The Son being brought down with a friend after school finished, and all the boys were soon exploring the surrounding camp site while the remaining parents struggled with their tents.

We were accompanied on the trip by a great guy named Andy who had been employed to run various bushcraft skills across the weekend and he organised some games in the evening while dinner was prepared. A crowd of ravenous boys returned from running around the woods and everyone sat around the fire eating their dinner. The night concluded with ghost stories around the fire while everyone gradually made their way back to their tents for a good nights sleep. 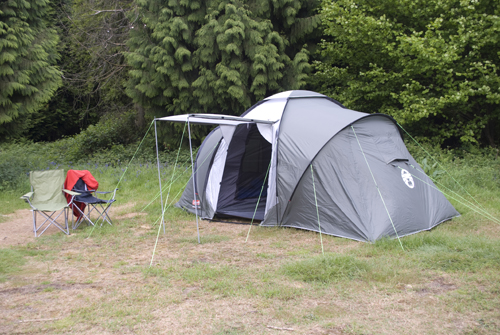 The Son was up bright and early playing outside with his friends and I staggered out of the tent just after 8am. After breakfast we went through the day’s event and splitting the boys into 3 clan groups so they could rotate through the activities. I took on the job of coordinating the clans and rounding up some willing parents so 2 adults took on the role of clan leaders. The clans then rotated through shelter building (assisted by their clan leaders), backwards cooking (again, with clan leaders), and fire lighting & building (run by Bushcraft Andy).

The sessions carried out through the day and the boys had a great time working and playing outside while undertaking some constructive tasks. Andy ran 3 separate sessions before dinner for each clan to run through a knife work session where a parent or guardian had to go with their child. The boys were well-behaved and enjoyed their time learing how to safely use a knife to carve a butter knife from a suitable piece of wood.

The boys were fed and then taken out into the woods for a game of ‘capture the flag’ by Andy before all the dads sat down together for a more civilized dinner. This capped off a fantastic day of activities and everyone was in good spirits before settling in front of the fire for another round of ghost stories and joke telling.

Sunday consisted of some more clan games as run by Andy and camp was slowly broken as some fathers & sons began to make their way home due to other commitments. I was there until the end to help with packing all the shared kit although sadly The Son fell into a massive strop because he was tired and just wanted to go home. Next year I will make sure to arrange for one of the other dads to take him home while I finish packing everything up.

We were lucky to have warm sunny weather for the weekend and everyone agreed that it was a resounding success. The father & son camping trip used to take place on the school grounds across a single night but descended into the boys going feral around the field while the dads sat around getting drunk. Over recent years the event has changed into a 2 night stay and move to a remote camp site with someone brought in to lead bushcraft and games sessions.

I loved the weekend and The Son loved all of it aside from the waiting around on Sunday afternoon. Next year I have put myself forward to run the trip with the fathers vowing to return for another weekend of camping fun.