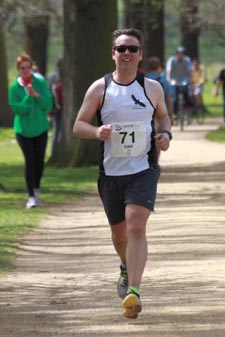 Running a marathon is hard. No matter how good you feel, those 26 miles and 385 yards can steamroller the joy out of you at any point and then kick you in the teeth as you try and cajole your body to the finish line.

I spent the last 12 miles of the Richmond Park Marathon silently repeating every known expletive in my mind while cursing myself for already signing up for the Abingdon Marathon in October. At least I could tell myself that I was never going to run 26 miles and 385 yards around Richmond Park again. Ever.

The day had started so well. I ate my pre-race favourite porridge at home while glancing at the blue sky, hoping for the forecasted clouds to start rolling in. The roads were clear as I made the relatively short drive from Ealing to Richmond and the clouds did indeed roll across the sky to seemingly hand me my perfect running conditions.

My now standard ‘must get there early, must get there early’ tactic had unsurprisingly got me to the park very early. I have no idea what drives me to arrive at races so early but I know that should the Four Horsemen of the Apocalypse decide to start decimating this fair planet of ours on a Sunday morning, I’ll still be able to navigate their terrible war on humanity to make the start line on time.

I made use of the time to make the obligatory visit to the toilets and it was not long before I was joined by the 3 other Eagles running and the first of the Eagles cheer squad members. The cloud cover decided to vanish as the BMF led warm-up started and it was bright sunshine that saw us crossing the start line and gradually snaking our way around the park.

The route started with a small loop consisting of the Richmond parkrun course but in the opposite direction (although not starting in the same place… sorry if that confuses you but it makes sense to me). My A goal was to finish with a smile on my face with a time under 4 hours, my B goal to finish until 4 hours 15 minutes, and my C goal was to break 4 hours 30 minutes.

We crossed the start / finish area for the first time and I glanced at the large digital clock, down at my Garmin, back to the clock… the time seemed off even though I would have expected a slight difference based on not starting at the front. I was running comfortably just under 9 minutes per mile and I decided to try and strike up some conversation with the runners around me to pass the time. I get that not all runners want to chat so after a few tentative exchanges, I struck up a conversation with a guy from New York and we chatted as we ran amiably across the park. 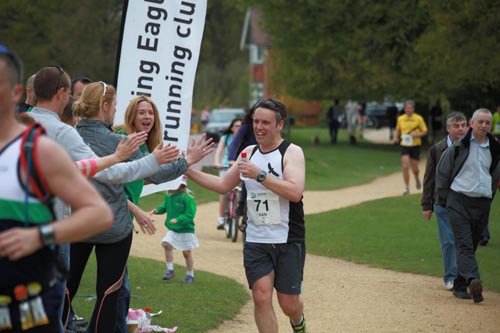 I went through half-way bang on schedule in 1 hours 59 minutes and I was still feeling strong. My pre-race tactic of power walking the steeper hills and taking on water as I walked through each drink station was working well. There were Eagles spread out around the course and their continuous encouragement brought a smile to my face. It also helped having my name printed on my race number, so other park users also gave cheers of encouragement as we ran past. However, the wheels of my running wagon gradually started to wobble as the sun continued to beat down and the temperature increased.

The first signs of trouble for me occurred on a long straight tarmac section where I could feel the rays from the sun hitting me from above while also bouncing off the reflective surface. I have this thing about running just in a vest that makes me feel uncomfortable, so I tend to wear a short-sleeved running top underneath. I soon realised that this was a big mistake as I was starting to overheat and it took me a while to finally admit defeat and take the t-shirt off and just wear the vest. Thankfully I caught up to a cheering Eagle and he was kind enough to look after my sweaty running shirt. 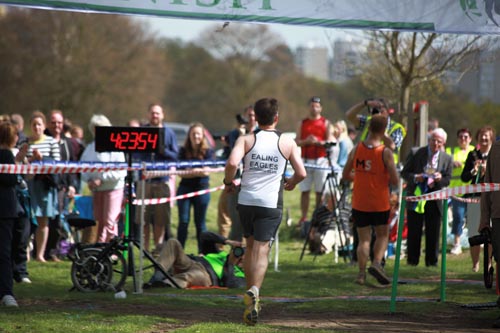 Somewhere past mile 14 I was joined by a couple of Eagles, who ran and chatted to me for a short distance. A very welcome distraction indeed. I knew that my sub-4 hour goal was slipping away and had no choice but to start slowing my pace as my legs were just not there today. I generally felt good and had plenty of energy but my legs were just not there to carry me round. That’s what happens when you miss the final 4-5 weeks of your marathon training plan due to injury.

I continued as fast as my little legs would allow and gave a cheer to the race leader as he lapped me before I passed race HQ for the final lap. I have to admit that the last loop of the park was bit of a blur as I gritted my teeth and zipped up my man suit. The 4 hours 20 minutes pacer caught up with me with his one runner so I latched onto them for a few miles until I reached the next big hill, where I left them to gradually jog into the distance as I walked the drink station and hill. 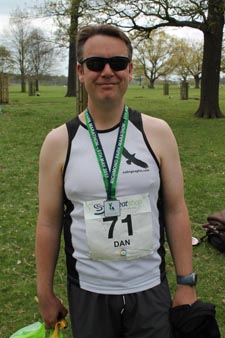 With ‘only a parkrun to go’ I continued my slow trundle along the trail with determination to pick off the stragglers ahead of me. I could sense the finish line approaching and I was delighted to be joined by a watching Eagle to run with me for the final few 100 metres before I stormed across the finish line in a blaze of glory.

Thankfully the Eagle cheer squad had dispersed by the time I finished my ice-cream and was called up for my free leg massage. I was suddenly hit with cramp in my feet, which led to me screaming like a girl until the considerate masseur helped stretch out my feet. Thank you!

Running a marathon is hard. The strange thing? Finishing a marathon is awesome. It’s exhilarating. It’s a challenge only a tiny percentage of people meet. That bit about never running the Richmond Park Marathon again? Already binned. I will be back next year.