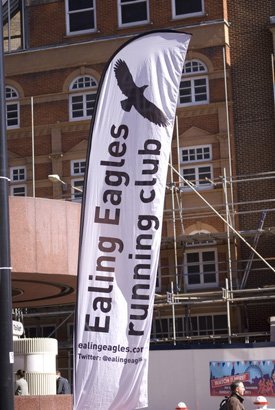 On the 29th March 1981 I was mumblecough years old and standing on Blackheath with my mum, wondering why I was there and who the people were running around. This was repeated on and off through the 1980s, 1990s,  and into the 2000s where I stood with Mrs Dan and The Son on the Isle of Dogs watching Paula Radcliffe bob her head around in a new world record of 2:15:25.

I have always enjoyed watching and cheering on the marathon runners, especially ‘the masses’ who need all the help, encouragement and jelly babies a person can give. This year I was privileged to join the Eagles cheer squad to shout myself horse just after mile 23 on the marathon course.

We gathered at Ealing Broadway station armed with enough food to feed a small army, several bays of straw for sitting and standing on, and all the necessary bits & pieces to cheer our running Eagles. The Son accompanied me and I brought along a camping chair for him to sit on plus our contribution to the communal picnic.

There were some odd looks from our fellow Tube travellers as Mr Eagle himself fluttered around the carriage – some say it was just a man in an Eagle fancy dress costume but we knew better. The motley crew of supporters disembarked at Monument station with bales of straw perched on shoulders and we made our way down to the marathon course, where our territory was staked out with small cones and police tape (much to the amusement of the police motorbike riders who cruised past shortly after). 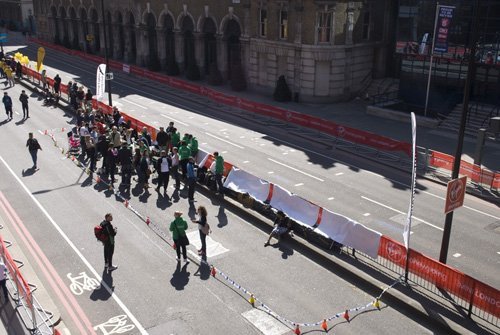 The route was remarkably clear of spectators at 10am and it was just us and a charity cheer squad setting up along the long stretch of road. I set The Son up in his chair before making our way to a nearby coffee shop to fuel ourselves with hot chocolate and croissants. The Son settled down to drain the battery on my iPhone by watching the live BBC race coverage while I went for a wander around the area to take some pictures and say hello to the charity cheer squad.

The wheelchair racers were the first to pass and we cheered on David Weir as he whizzed past. The elite women followed a little later before the elite men went past in a blur and then the serious cheering started. We had tied on several club banners to the railings in front of us but you are not allowed to display these until all the elite racers have past because otherwise they block out the official sponsor banners, which is a ‘bad thing’ for the sponsors because they expect their logo (this year, Virgin Money) to be on display at the side of the road for all the TV cameras accompanying the elites. 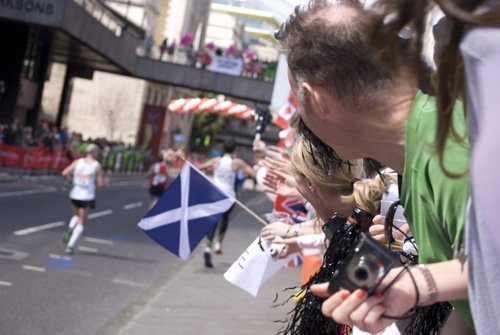 The Championship runners began to pass and we focused our energy cheering the club vests that we recognised. The first Eagle runner was spotted hurtling his way towards us and he had leapt onto the curb in front of us so the cheer squad could high-five him on the way past. The number of runners passing began to gradually increase and the next few hours were a blur of cheering on Eagles, other running clubs, and anyone with a name printed on their vest. My only disappointment was the runners who choose to print their name on their tops but then listen to music all the way round – I gave up shouting out names to runners who probably could not hear me.

Olympian Richard Whitehead flew past and with a shout of “SHOW US YOU GUNS!” from me and The Son, he duly obliged by raising his arms and flashing his guns back at us with a broad grin on his face. Top man. I was able to spot and cheer on Marathon Talk  regular and Emmerdale actor Tony Audenshaw, former British 400m runner Iwan Thomas (who did not look in a good state), and an unidentified BBC presenter (sorry – I do not watch TV so no idea what his name is but he had BBC presenter written all over his top).

Some of the passing runners were not looking good by this point and I remember one guy suddenly stop and keel over backwards where he was caught by the runners around him. Thankfully he was ok to carry on after a short sit down and a few gulps of water. The Son was getting a little bored by this point so we said goodbye to the rest of the cheer squad and made our way back home. I was impressed that he was able to stand around cheering the runners for well over 4 hours with me.

Next year I hope to be running the Virgin Money London Marathon as I have once again put my name into the ballot. If I fail then I will put my name into the Eagles club ballot and if that fails then I will train for it anyway and try to pick up a last minute charity place. I won’t be that upset though if I am back spectating again next year because I have never had to much fun cheering on a race before.