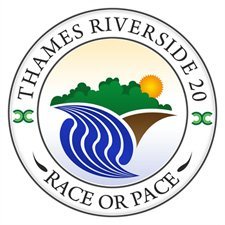 Clapham Chasers were our gracious hosts for the day as a small group of marathon training Eagles descended upon Putney on a cold Sunday morning. I had signed up for this run sometime ago as it slotted nicely into my marathon training schedule. On paper I was down for 18 miles but 20 miles with people to chat to and aid stations is well worth the extra couple of miles.

The event organisers dispatched an email on the night before advising an earlier arrival time so I dutifully set my alarms 20 minutes earlier than planned and quietly got myself ready on Sunday morning, desperately trying not to wake the rest of the household.

The roads were clear, which was to be expected at stupid-o-clock on Sunday morning so I had a serene drive to Putney and secured myself one of the Sunday free parking bays on the opposite side of the river. I walked across the bridge to the race village where I hunkered down in the cold with some fellow early Eagle runners. We all stomped around to keep ourselves warm while trying to figure out why we needed to be there so early.

I had signed up for the 9 minute mile pacing group, who I joined alongside 2 other Eagles, and we were soon off across the bridge. We stayed at the back of the pack for the first mile as we ran next to the road before joining the off road Thames footpath. The route is completely flat with the majority run on the trail like footpath and a brief section at the start and end where you join a normal roadside pedestrian footpath across the bridge. There are no roads to cross at any point of the route so it is extremely safe and very much off-road.

We were starting to feel a lot warmer so picked up the pace to around 8:40 per mile and chatted away as we ran past the early morning cyclists, walkers and dog owners. The path is open to everyone and us runners had been told that we do no have right of way and to be respectful to other people. This was not a problem at all as our group began to splinter into smaller teams and gaps were appearing around us.

We were now a group of 6 and with new people to chat to the miles began to pass by as we discussed their upcoming races and their running history. Unfortunately one lady needed an emergency toilet stop so 5 of us continued up to Kew Bridge where a one man Eagles cheering squad had set-up to high 5 us as we passed. We were now in familiar territory because the section up to Richmond Lock is used each week on the club Sunday run and it was not long before the race leaders were running past in the opposite direction.

We cheered each passing runner, including a very loud cheer for the first lady, and the path widened as we entered Richmond. We made a quick stop at the public toilets and then it was just 3 Eagles heading for the 10 mile mark where we circled the cones and began the run back to Putney. This then gave us the opportunity to high 5 the passing Eagles behind us and we made it just in time to say hello to the runners on the Sunday club run as they approached Richmond Lock. We finally passed an expanded Eagles cheer squad to Kew Bridge where I was given a couple of jelly babies, which tasted like the nectar of the Gods.

The 3 of us continued and continually kept the group in check as our pace would occasionally creep nearer to 8 minute mile pace. We also began to unconsciously swap the lead runner between us as the tiredness began to enter our legs. Putney Bridge eventually entered our sight and with a final push we crossed back to the race village and across the finish line.

Then carried on running.

Between us we had 2 Garmin watches reporting just over 20 miles and 1 watch saying just under 20 miles, so we carried on into the park just to make sure everyone reported at least 20 miles.

There was a table laden with lovely free cake for the runners (donations taken for charity) so we quickly began to wrap ourselves with warm clothing and then dived into the welcoming cake. I have to hand it to the excellent Clapham Chasers for organising such a great event. There were drink stations every 3 miles with a choice of water or Gatorade and without fail all the marshals were full of encouragement for the runners.

We stayed to cheer on all the finishing Eagles and recounted war stories from our run before heading back to Ealing for some much needed lunch. This was a great event with fantastic marshals and plenty of fuel stops on the route. I definitely plan to be back in 2014 as part of my Spring marathon training.

* Gun time starts from when the sub 7 minute mile group starts and there are then 2 minute intervals between each group starting.