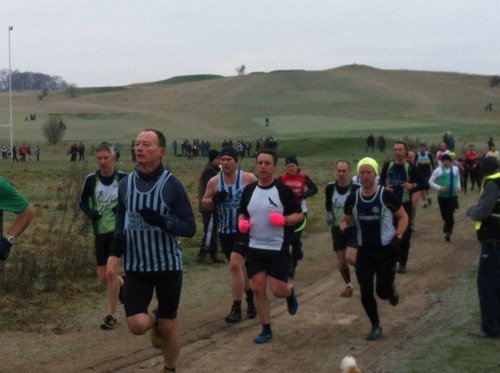 My Sunday Cross Country League début took place on the 13th January 2013 as I put on my Eagles vest once more to tackle the Royston hills. The course was fantastic and consisted of slopes, undulations, steep hills, twisting trail paths and short bursts through tree root tackling woodland.

Pre-race there was much group discussion whether to wear spikes or trail shoes as the ground was firm underfoot and I was leaning towards trail shoes even after a warm-up around the first hilly section of the course. Thankfully we shifted to the view that spikes would give much-needed grip on the descents and it proved to be wise a choice.

The mass of runners sped off on a gentle downward slope and the field began to spread as we tackled the first hill and a single loop of a small field. We returned back to the start area for a much longer energy sapping uphill struggle and down once more on a narrow trail, with the more adventurous braving bracken to overtake along the side.

The lead runners were already far into the distance but the looping hill gave a clear view and I ran in awe of the way they bounded down slope and twisted around tight corners. My route switched back to allow the high 5 of fellow Eagles behind and it was soon time to face the same dreaded hills for a second time.

My racing tactic involved tucking behind small groups of runners on the uphill sections, which there were plenty of, but then exploiting the grip of my spikes to steam downhill. This worked a treat as I passed shuffling packs of race / trail shoe runners trying not to fall on the steep sections and with a grimace of a smile, I put on a final sprint to make up those all important few finishing places.

I have to say that this was my favourite race of the XC season as the course was a joy to run and the marshals were full of encouragement for all the runners. I will be marking this one down in my diary for 2014 as a ‘must go’ race.