We gathered at Old Deer Park parkrun this morning for an Ealing Eagles versus Barnes Runners mob match. The Son was not running today due to a stomach upset but was well enough to go with me as photographer and cheer squad.

The rules for the match were quite simple – we all run parkrun and then the result fairies tell us who won. Ok, that’s not quite how it works. There is something to do with lowest team turnout minus 3 to decide the number of scorers and then those positions are added up with lowest score winning. Personally I prefer the thought of result fairies.

I think it’s traditional for me to get the excuses in early –  our squad was slightly depleted today as some of our regular parkrun speedsters were off running a 45 mile ultra. However, we were still 17 Eagles strong and determined to take the match. Barnes had brought 23 runners so this meant the top 14 finishers of each team who contribute to their respective team total.

The Old Deer Park parkrun route starts in line with a yellow marker on the tennis court fencing and then consists of 3 laps of flat grass land with a tiny crossing over a tarmac path near to the main road. I was debating whether to take my XC spikes with me and I would have probably worn them but I have a XC race tomorrow and was too lazy to consider cleaning them again this week. There was not too much mud around today so my trail shoes were fine although I did slide around on some of the more muddier patches at the top of the park. 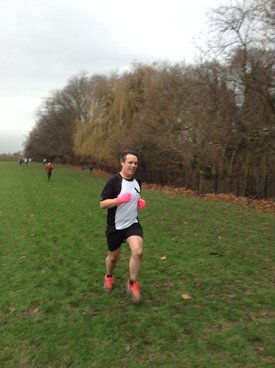 I set off at my normal 5k pace but by the end of the first lap I was suffering from some stomach cramps again (the same happened a few weeks ago at Gunnersbury). The Son was busy crossing the park so that he could take pictures as we passed and I gritted my teeth and plodded on because I was not going to lose face in front of him.

The small group of runners just ahead of me began to slowly pull away from me but thankfully I seemed to be doing the same to the runners behind me – I probably could not have handled a sprint finish!

In the end I was overtaken on the last lap by one other runner but he was not a Barnes Runner so that would have no bearing on the overall result. I found it tough going today with soft conditions underfoot and an unexpected headwind along the top of the park. In the end we were soundly beaten by Barnes but we had an enjoyable time and there is already talk of a rematch on firmer ground.

After the run we descended on the small café inside the swimming centre for some snacks and warm drinks before heading back home. Some of the more adventurous Eagles were combining parkrun with their marathon training so they had run to the start and were already running home while we were resting in the café.

I have to extend my thanks to Old Deer Park parkrun for accommodating us today, to all those involved with arranging the match, and to all the volunteers who made the event possible.

Running the past 11 consecutive days through a combination of Janathon and Jantastic has worn me out a bit and it has not been helped by running a couple of races during the time as well. Tomorrow I have another XC race and then I plan to take a day off from running so will have to come up with something suitable for Janathon instead.