A third day of running successfully completed with a 7 mile circular route around some of the leafy Ealing parks. Today I went out before breakfast as my real lunch break would be needed to take The Son to his maths & English lessons later in the day. Once again I took my phone with me to try to take a picture of something interesting but it was just another boring day in this part of London.

Later on I managed to get into an argument with The Son about the homework he had not completed as promised and we quickly descended into a bout of name calling:

Now I remember why the ‘working from home’ system only really works for one day because we both go stir crazy on the second day and then all hell breaks loose. The argument ended with him stuffing most of his wardrobe into some rucksack and storming out of the house proclaiming that he was “…running away and taking the Tube somewhere”. I watched him walk half-way down the street from an upstairs window and he turned back home before he reached the point where I would have to go follow him. He then sat down in a sulk under the kitchen window until he finally knocked on the door and stormed up to his room.

If anyone wants some more top parenting tips then feel free to get in contact! 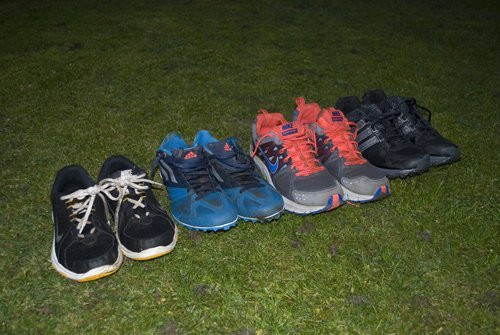 I did manage to do something useful in the afternoon as I took my smelly, mud encrusted, running shoes outside to clean with the aid of the garden hose and a big brush. I did think about taking a ‘before’ picture but I felt too ashamed to put something that disgusting online. My cross-country spikes are needed for a race on Saturday so they had to be cleaned and the brightly coloured Nike ‘hybrid’ trail shoes had already been banished to the garage because they had been abused so much recently at various bog like parkrun events. I could not remove the stench from the Nike shoes so they have now gone through a cycle in the washing machine and I can happily report that they are in a better condition.