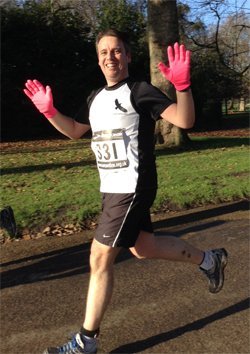 The first day of a new year, the first day of Janathon, and what a cracking day it was out there for running. I joined some fellow Ealing Eagles for the Brooks Serpentine New Year’s Day 10k and 3k Fun Run in Hyde Park for my first race of 2013.

The Son accompanied me to act as my official photographer and cheering squad as I ran the 10k and then we switched roles so that he could run the 3k Fun Run. There was a fairly comfortable hour between the start of the 10k and the 3k but I did use this as an incentive to put in a fast time, by my standards anyway, so that I could make sure that he was ok for his race.

The race itself went well and I really enjoyed myself as I hit my stride and motored around the course. I have a tendency to take off too quickly at the start and pay for it later but this time I hung back for the first few kilometres as part of a triumvirate of Eagles. They were aiming for 49 minutes so I decided to stay with them until I felt fully warmed up and around the 3km marker they told me to stop slowing and so I upped my pace for the rest of the race.

The sky was clear, the water of the Serpentine sparkling, and the park was gradually filling up with walkers and visitors to the Winder Wonderland. We did have to contend with one disgruntled non-racing runner who decided that he was Moses and by running dead centre through the oncoming racers he would make everyone else part for him and not stick to the side of the path. Maybe next year he will register and join the race than act like Mr Grumpy Pants. 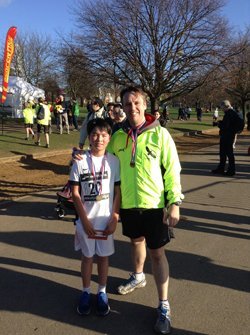 I loved that the finish line was visible from a fair distance away so there was no excuse for a fast finish and indeed my Garmin splits show 4:09 for the last kilometre, which was my fastest split for the race. The Son was waiting at the finish for me and we made our way back up to the start line for his 3km race. I even leant him my lucky ‘go faster’ pink running gloves although he had taken them off by the time he sprinted through the finish.

The Eagles collective made a side trip into Winter Wonderland where we sampled some bratwurst in the Bavarian Village and I nearly had a heart attack when I had to pay £2 for a can of 7up for The Son. I cannot see myself returning there any time soon.