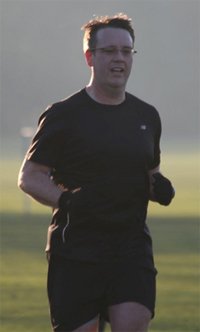 A rarity for me at parkrun this week as I was running by myself because The Son was resting following a late night at his school disco. My preparation was not very ideal due to a speed work session the day before and then letting my diet go a bit the night before while The Son was busy dancing Gangnam Style. However, I approached the opportunity of a fast run with glee and I was determined to take a chunk out of my PB (23 minutes & 27 seconds).

There were few runners around when I arrived so I took a gentle run down to the bottom of the park, after dropping my jacket at the start area, and then picked up some speed on my way back to make sure that I was nicely warmed up. A quick run briefing this week before being led up to the start line and then again shuffled backwards with some laughter as we had lined up too far forward.

My aim was to make use of the downwards slope at the start by going out hard on the first km before gritting my teeth and dropping the pace slightly for the uphill section to half way before once again using the slight downhill sections to wind it up again. In my mind I had the A goal of a sub 23 minute time and a B goal of anything as long as I set a new PB.

I certainly bombed it down the first km, making sure not to lose my footing on the muddy grass section near the start, and I found myself just about hanging onto a small group of runners that seemed to be on a good pace. I had my Garmin with me but was concentrating more on my form and hitting a near maximum effort so did not pay any attention to my real pace. I started to fall off the back of my unofficial pacing group, who I would later find out were aiming for a sub 21 minute finish, and had to dig deep to keep the legs moving so that I did not suddenly lose the desire to go flat-out.

It is tough trying to run a fast time by yourself, especially when I could hear some other runners just behind seemingly using me as their pacer, but I have to tip my hat to the guys who suddenly pulled just ahead of me because the 3 of us fed off each other to support our pace. I have no idea whether they deliberately made the move but as a tiny group we were all quickly rotating the lead. We made our last turn and with a slight incline to the finish line I pumped my arms and tried to pick up as much speed as possible. I could not get up enough of a sprint to haul in the runners ahead of me but it was enough to hold off the small group I could hear just behind me. I know parkrun is not a race but today it was all about setting a new PB and getting an idea of my fitness level so I used all the runners around me as though I was in my own personal race.

I did remember to stop my Garmin this week and was flabbergasted when I saw a time of 21 minutes & 58 seconds. I had smashed my A goal of a sub 23 minute run by hitting a sub 22 minute 5k. My results came through later in the day to show a parkrun time of 21 minutes & 57 seconds, which meant that I had taken 90 seconds off my previous best. I also checked out the results of the runners around me to find that I was in a group of 6 consecutive runners who all set a new PB. Great stuff.