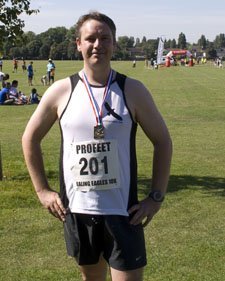 My local running club, my nearest parkrun location, so what excuse could I have for not running this fantastic race? None!

Last year I ran the Gunnersbury Park 10k, which was partly organised by Ealing Eagles, and this year the Eagles were back in full force at the same location to run their own 10k event. A lot of care and attention had been put into the organisation of this race and it was clear that the event was set for runners by runners.

I remember that the similar event last year, although admittedly not fully run by Ealing Eagles, was a low key affair with a small desk area for registration and friendly marshals around the course. Nothing wrong with that of course but this time around the Eagles had done a superb job as the field was larger, chip timing was included in the entrance fee, the registration area was much larger and much better organised, the start & finish areas were much more professional, there was a good selection of sponsors on-board handing our drinks or providing a massage at the end, and the finishers bag / area included a good quality medal and a good selection of food & drink to replenish lost energy.

I had persuaded my running buddy to enter as his very first race so we arranged to car share and I picked him up before driving to Gunnersbury Park. The Gunnersbury car park is not huge so we aimed to get there a bit early, which proved to be a wise decision as the spaces were getting sparse as we arrived, and make sure there was plenty of time to collect our race pack, visit the toilets, and go for a short jog to warm-up.

My original aim was to break the 50 minute barrier again, indeed last year I was just under 49 minutes on a very similar day, but my fitness was not quite at the same level and my weight was a tad higher as well (boooooo!). I went off in the middle of the pack and tried to pace myself around the 5 minute per km but the heat got to me be a bit so I revised my race plan to aim for anything under 52 minutes.

The route started with a small lap of half the park, much like the first loop of the parkrun route (but the opposite direction! Wooohooo!), and then back round for two larger laps. There were friendly marshals all around the course and their encouragement was welcome to drive me on as the temperature continued to rise. A drink station was nicely positioned for the larger laps where again there was so much friendly support & help from the marshals handing out the drinks.

As I approached the start of my last lap I heard the calls of “lead runner approaching, lead runner approaching” behind me so put on a burst of speed to avoid being lapped and then watched the race leader steam through the last 200 metres and take the win by a considerable distance. It was then just a case of dragging myself around the park once more and putting on a sprint at the end to only just finish over 51 minutes.

At the end our medals were handed to us along with a finishers bag containing a snack and there was a table offering free fruit and drink. I grabbed my bag from the storage tent and headed back to the finish area to take some pictures of my running buddy as he approached the final section.

Overall this was a fantastic race with excellent organisation, plenty of support from the marshals around the course, certainly scope for a PB thanks to the mostly pancake flat course, and bodes well for the upcoming Ealing Half Marathon as the organisation committee is basically the same. I would recommend this race to everyone and I will definitely be back next year and we’ve already started a discussion on bringing our families along for a picnic if the weather is good again.