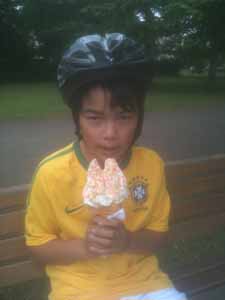 It’s Sunday and that can mean only one thing in my running itinerary: long run! My legs are starting to feel it a bit from the continual running but I plough on and today The Son decided that he wanted to join me on my run along the Thames path so I put his bike on the car and we headed off together.

I had agreed with Mrs Dan that I could bring him back home and go out running again if The Son tired of cycling with me but he stuck to the task and had a really enjoyable time. There were a few hairy moments where the path narrows considerably and The Son went a bit close to some pedestrians for my liking but that’s all part of the learning process for him.

This week I had checked the times of the high tides to make sure the path was not going to be submerged again although we did see a lot of detritus from the morning high tide. There was plenty of storm damage along the path with broken tree branches littering some sections and at one point there was a fallen tree blocking the entire path. Thankfully it had been attended to and a path had been cleared around the base of the trunk so we did not have to stop and turn around.

I promised that we would stop at the half-way point for an ice cream and following the laws of all young children everywhere, he had to have the largest ice cream possible and then cover it in sickly hundreds & thousands. It must have been large because he failed the challenge and could not finish it. Good job his dad was on hand…

You Shall Not Pass

We both safely made the return journey although The Son insisted that I was slower and must have been tired because I kept stopping. I tried to point out that I kept stopping because; a.) he fell off his bike and wanted to make sure he was ok; and b) he kept stopping so I stopped to check everything was ok. His little legs are aching tonight, as are mine, and our long run experiment worked out well. Let’s see if he wants to join me next time.