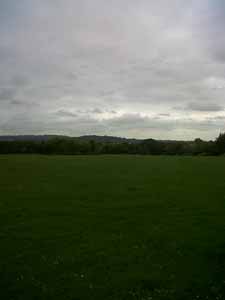 A tiring start to the day thanks to a customer bringing forward their maintenance by a week so I had to work last night from 9pm until 1am to coordinate people our side. Things went relatively well but me working late always has an impact on Mrs Dan & The Son as their sleep is disrupted no matter how quickly and quietly the work goes. However, I was able to read some more of the excellent ‘Run!: 26.2 Stories of Blisters and Bliss’ by Dean Karnazes during the quiet lulls in the work. Possibly not as engaging as his previous books but still I find his writing inspiring and I just want to lace up my running shoes and head outside again.

Today I went out for another run on what I now call the ‘Gurnell Loop’ since it involves me taking in a loop out to the Gurnell Leisure Centre, which is where I go for karate training, and then back home again alongside the busy A40. Once again there was no rain when I left the house and at least I made it to the top of the first hill this time before the rain started. Thankfully it was more of a light drizzle rather than the downpour from yesterday.

One of the great things about running outside, particularly on a route than passes some highly populated shopping areas, is the amount of people watching that can go on to take your mind off the running. Today I spotted a teenage couple ahead of me walking hand in hand and I could not understand why the boy was walking in his white socks without any shoes. As I approached I noticed that he was carrying a pair of killer high heeled shoes and his girlfriend was walking along in his trainers. Young love. I still cannot work out why she would be out in a pair of high heels in the first place though, they were both wearing casual clothes and not anything to indicate they had come from or were going to a party or somewhere formal.

The rain did start though and I decided that any other passing runners would get a wave and a “hello” from me as we passed. So I passed two other male runners and both gave a “hello” and smile back as they trudged past in the rain. I even received an unexpected “good morning” from a walker so I will carry on my friendly running experiment tomorrow.