I dropped Mrs Dan & The Son off at the local tube station for their afternoon out at the Science Museum and then I made the shortish drive to Kew Bridge where I parked my car in the nearby residential area so that I could enjoy my long run along the Thames path from Kew to Teddington and back. This was one of my staple long run routes through the summer of 2011 thanks to the beautiful scenery, traffic free path, and interesting people to watch to while away the time.

After cursing myself on the first day of Juneathon for not taking anything to take pictures with, today I made sure that my phone was zipped up in one of the pouches on my water bottle belt. The river was extremely busy today with boats returning from the Thames Diamond Jubilee Pageant, which took place in London yesterday. The walkers, cyclists, and runners along the path were all waving to the procession of boats and there were plenty of waves and whistle blowing from the boats in return. 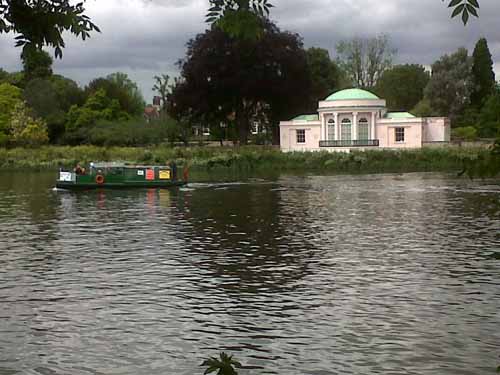 I had forgotten just how much I love running alongside the river and I was amazed to glance down at my watch to see that 5km had flown by as I had been admiring the boat procession and people watching. I was soon weaving my way through the more people packed riverside area at Richmond where I spied a craft fair taking place that had some amazing looking cupcakes for sale. I silently thanked myself for only bringing £1 with me so I knew that there would be no sneaky cupcake eating going on for me during the return leg of the run.

I was soon through Richmond and through the scenic area of Petersham before the final stretch up to Teddington Lock where all the pageant boats were backed up in a queue to pass through the lock before being able to continue their journey along the river. There were plenty of onlookers admiring the boats and their various crews were chatting away with everyone as they waited their turn. 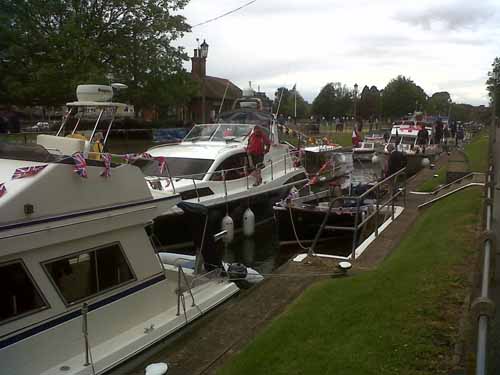 I carried on running for a little while longer until I hit the 11.5km mark, which I know coincides with a nice set of benches next to an impressive oak tree, where I make a quick pit stop for a running gel and a drink before turning around for the return leg. Everything was proceeding wonderfully and my legs were fine but I soon started to approach a stretch where the river had crept up onto the path. It wasn’t enough to stop my progress since the path was still wide enough to accommodate a dry section but I did notice a family starting to pack their picnic and move away from the river water that was starting to get a bit too close for comfort. However, my run was cut short a little further down the path thanks to the river completely flooding its way across and I did not fancy the extra few miles that would be added by me doubling back and taking a longer route around, so I waded my way through the knee high water until I reached the Petersham fields where it was dry again. 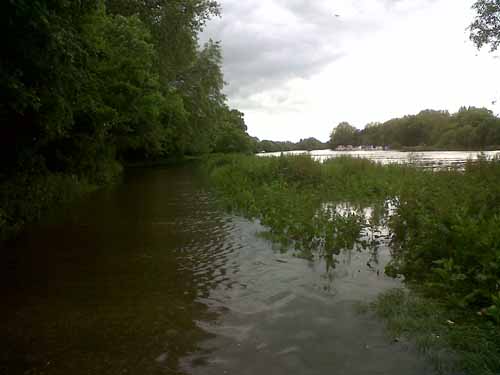 I seemed to be the only idiot slogging through the water and the walkers & cyclists were just turning around and giving up. Unfortunately a few of the earlier car drivers had not paid attention to the flood warning signs and did not know that high tide was approaching in the afternoon because their cars were now starting to turn into boats. It probably seemed a great idea to park near to the river in the morning time but I wonder what sort of state their cars were in when they arrived back. 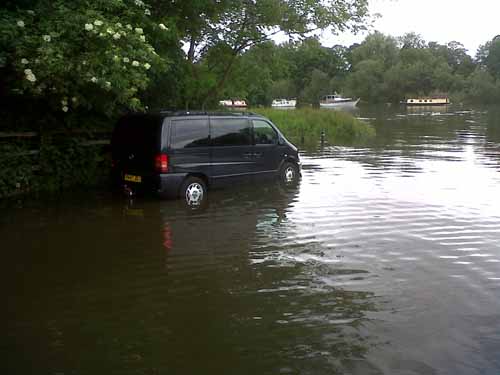 Not the best place in the world to park your car

The river paths through Richmod were flooded as well so I squelched my way through the town centre in the hope of joining the path further along where the river bank is considerably higher and there are outlets for the river water to disperse during the high tide. The craft fair had come to a halt thanks to the water and even if I had brought some cash, there would have been no chance of buying a cupcake. 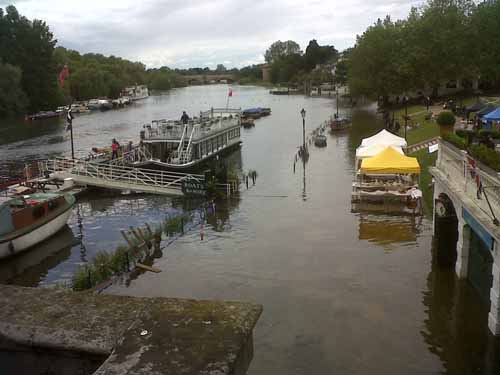 No chance of a cupcake

I finally made it back onto a clear section of the path so enjoyed a dry run back to Kew and to my waiting car where I had the good sense to bring along some spare socks and shoes. I had been worried about the chance of rain and did not even think to check the high tide information online before leaving home. Even with the water wading and soaked shoes, I really enjoyed my return to one of my old favourite running routes and it was great to finally make the time for a long run. Unfortunately Garmin Connect seems to be having a few problems at the moment and it somehow believes that my elapsed time was 596 hours and included me starting from London and finishing somewhere in Russia. I know the data is clean because I uploaded it to Running Free and  they showed the correct route on their mapping service so fingers crossed that Garmin sorts out their site soon.

Janathon Over… Now What?