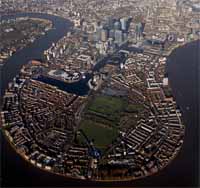 My plans for a gentle morning run around the Isle of Dogs thanks to a early lunch were quashed due to a sudden requirement to deal with a customer problem. Instead of running I was stuck at my desk on an everlasting conference call although I did get a few minutes to pop over the road to the salad bar to buy some lunch, which I ate while the conference call continued.

All the work related problems were finally all resolved, or at a state where immediate action was not required, so I scooted over to the gym to get changed for my run. My work colleagues were quick to fire off their jokes about me going for a run and not bothering to come back again: what jokers I work with!

I did not enjoy the run as much as usual though and I put it down to; a.) running after lunch, which I am not a great fan of; and b.) being a bit tired from the frantic work through out the day. I was also bit of a numpty and forgot to take my phone with me so was not able to take pictures of:

Work also got in my way again as I was typing up this post last night during the England vs Sweden football match. An out of hours call from the office meant that I had to stop writing and miss the second half of the match.