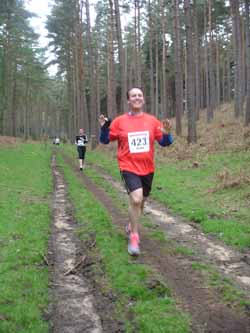 The inaugural Bluebell Run took place in 2011 and I entered after a friend forwarded me the details. I had a really good time at what was a small event organised by a very friendly Scout group and a local group of runners. I do not get the opportunity to run very many trail races so I had this pencilled in for 2012 and I was glad to see it back on the race calendar under the new name of ‘The Woodland Woggle’.

The event offers a 10k & 5k race plus a 5k family walk so this year I ran the 10k race again but was joined by Mrs Dan & The Son as they tackled the 5k walk. I had signed up earlier in the year but with the UK experiencing a deluge of rain all the way through April, I held off entering the family so in the end we arrived a little early so they could register and pay on the day. My friend also took part for the second year and he had roped in a couple of former work colleagues as well.

I am not sure what went on with my satnav this time around because I found myself driving down a private road through the Hampton Estate until we reached the Hampton Lodge itself. I knew the field used as a car park was on the opposite side so I carried on through with the hope that the estate owners were not going to appear and chase me off their land. However, I suspect that we were not the only runners to enter from the wrong side and end up driving past the Lodge. One of the Scout leaders was once again based at the entrance to the field utilised for parking and he was using his big fake comedy hands to point everyone in the right direction.

We made the short walk up to the staging area where Mrs Dan & The Son were drawn to the refreshment area to buy a tea and a cake while I collected my race number at race HQ and also entered them both for the walk. The Son was well chuffed when I presented him with his own race number, which was a nice touch by the organisers and made his day. There were different style race numbers for each category so the organisers had done a good job so that 10k runners, 5k runners, and walkers could all be identified easily by their race number.

Following a brief talk by the race director we were all taken on the short walk down to the start area where The Son was able to take a few pictures of me before the race was officially started. I was quickly across the start line and running up the private road to Hampton Lodge and then up the main hill of the race before crossing a public road, expertly marshalled for safety, where the road changed to trail / woodland path. Mrs Dan & The Son were far behind walking the same route and they stopped briefly at the Lodge to say hello to the watching owner and to compliment him on his house and Estate.

I had no idea what sort of pace to run because all my training through winter and spring had been dedicated to the marathon so I was not sure what to expect. I decided to stick around the 5:40/km pace and was soon running through the woodland where amazingly there were bluebells this time. The first 5k seemed to fly by and I crossed the half way mark just as the second lady was completing the 5k race. The finish area had been moved this year and was directly outside race HQ, which made much more sense and was a much better location compared to 2011. 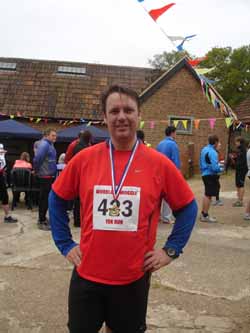 The route is basically 2.5k of varying ascent before 2.5k of varying descent so crossing the 5k mark completed the first loop and I was soon dragging myself up another hill before joining the tarmac road near the start that took in the largest hill again. At this point I was flagging a bit and the slower of our friends had caught up via their sure but steady pace. I slotted in behind and tagged along behind them as we passed back onto the field and into the woodland area. We then began to catch the rear walkers as the trail narrowed but then discovered how the route had been changed to move the finish line further back to race HQ: the runners route diverted off to the left rather than the right had path we had taken on the first loop and which the route had taken the previous year. This was a great change by the organisers and meant that the runners were not competing with the walkers for space along the narrow woodland path.

I carried on at a comfortable pace until I spotted Mrs Dan & The Son further down the hill as I was approaching the 9.5k point. The Son had spotted me and took a few pictures before handing the camera to Mrs Dan so that he could race me! I picked up my pace and raced him for the rest of the route and up until the finished line. The spectators and race finishers gave him a good cheer as we sprinted together, with a few accusing me of cheating by making him wear a ruck-sack, and The Son crossed the finish line a hairs breadth ahead of me.

We both collected a finishers medal and some jelly babies from the Scouts (great idea!) and caught our breath while we waited for Mrs Dan to finish the walk. I later checked my split times and thanks to the unexpected race with The Son, I completed a sub-5 minute final kilometre. I was running sub-50 minute 10k’s at this stage in 2011 so I am a bit off the pace but it was nice to know that I had something in the tank for the finish. We grabbed a bacon bap each at race HQ before saying goodbye to everyone and driving home.

Once again it was a delight to run this race and even better that my family took part. They had a fantastic time and both are looking forward to taking part again in 2013. My time was 4 minutes slower than last year but following all the ponderous marathon training I was worried about being able to run under 60 minutes so overall I was pleased with my race. However, it did allow my friend to beat me this year (he even stopped for a toilet break!) so I will be starting my speed work a lot earlier in 2013. Another fellow runner from work is also going to join us both next year so it should prove for an interesting race.

Our thanks go out to the race organisers, the owners of the Estate for use of their land, and all the Scouts & helpers who made this such a wonderful race. The small changes to the route and overall organisation made this as fantastic event and we will definitely all be back next year.

The all important race information (not chip timed):