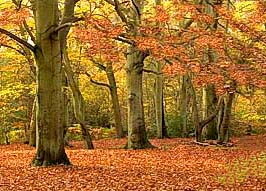 The son attends a class on Saturday evening in preparation for the 11+ exam he is going to take later in the year so we have a couple of hours to kill in the local area before we pick him up. With the onset of some nice weather we decided to grab a small dinner and drink at a well known coffee shop chain before going for a walk around the beautiful woodland at Burnham Beeches.

After several weekends of following the main paths we (well, me) decided to be more adventurous and take a longer walk around some of the small trail paths that pass through the woodland. Everything was going well and we were enjoying the walk and the wildlife scampering around but we soon realised that we should start heading back. Except we were not exactly sure where we were. We were not quite lost. Just not entirely sure of our exact location but with a general idea of the way back to the car park.

We made our way back onto one of the main paths and followed it back towards the direction of the car park but another trail path veered off in the same sort of direction so we scratched our heads for a while. I was in favour of continuing on the main path while Mrs Dan felt the trail path was better. Of course we know who wears the trousers in this relationship so it was the trail path we took. It took us on a nice loop all the way back to the half way point where we had already been. Thankfully there was a map and we realised that we had to turn around and then turn off towards the direction of the main path that I wanted to take.

So no harm done and certainly no gloating from me about the choice of final path because it was my decision to be more adventurous in the first place. We made it back in plenty of time to collect The Son and I suspect that we will be playing it safe on our new walk through Burnham Beeches.