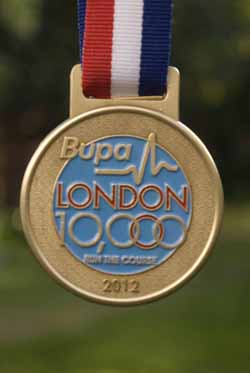 Some days I run because I feel that have to, some days because it helps me collect my thoughts and deal with stress, some days to get a bit fitter and lose a bit more weight, while some days it’s all about racing and chasing a new PB. On rare occasions I run because running itself is just simply glorious. Sunday 27th May 2012 was one of those glorious running days as I tackled the Bupa London 10,000 on a fantastically warm and sunny day alongside 10,000+ other runners and a small sprinkle of  Olympians.

In 2011 I ran the British 10k as I wanted to run a race through a temporarily closed central London but the event has a poor reputation within the running community and while I did not find it as bad as some make out, it was not really a great race and there was nothing to justify the high entrance fee (interestingly the 2012 race is now partnered by Nike so it’s possible things might improve). I looked around for an alternative and found a lot of runners recommending the Bupa London 10,000 so I signed up in July 2011 to secure my place.

The UK finally decided to ditch the constant rain and a hot & sunny Sunday greeted me as I finished packing my race day bag and said goodbye to my family. Mrs Dan would be taking The Son to the Science Museum for the morning with the plan to meet me somewhere close to Green Park, hopefully close to my race finish time.

I had planned out my journey to arrive a good 30 minutes before the race start time (10am) but had not planned on my Garmin freezing so I could not tell the time. I had left it charging overnight and in the morning I had put it on but without checking the screen. I then finished off getting my stuff together, glanced at the time and saw I was on schedule, and walked down to the station to take the train to Green Park. Unfortunately my watch had frozen at the time when I disconnected it from charging so I did not realise that I was actually running behind schedule until I checked the time again while waiting on the platform for the next train. Cue some frantic Google action via my iPhone to figure out how to reset the watch for the race and some schedule checking to make sure I would still be on time. I spent half of the journey inputting all my preferred settings back into my newly reset watch and arrived in time to use the toilet, grab a free bottle of water, drop my bag off for safe keeping, and walk down to the start area to join my start wave.

My main beef with the British 10k related to the lack of any guidance for runners where to start based on projected finish time. The Bupa London 10,000 is able to deal with this much better through the use of Green Park for race HQ & baggage area and the start line being set-up on The Mall, which is closed off from traffic for the duration of the race. During sign-up you are asked for your projected finish time and this is then used to slot you into different start pens that are based on colour and letter. I probably put myself down for 48 minutes and was in C group of the red wave so ended up relatively close to the start.

The start ran with precision timing and at 9:58am the ‘elite’ runners were introduced; Mo Farah, Scott Overall, and Mara Yamauchi representing UK Olympic athletes alongside a fair chunk of the Japanese Olympic marathon squad. My second gripe at the British 10k was the length of time wasted at the start that caused a delay to the planned start time. No such problem at the Bupa London 10,000 as the elite runners and championship runners were started precisely at 10am. The red B runners were next up and my wave was then shuffled forward onto the start line and I was then off and running 3 minutes after the first starters.

The initial part of the route skirts past Trafalgar Square through a narrowing segment before the road widens again along the Embankment. Crowd support was strong and there was a band set-up under Hungerford Bridge (aka Charing Cross Bridge), which provided great acoustics, and we were happily running along Embankment in the sunshine.

I was hopeful that the elite runners would have run most of the course and looped back for me to run past them on the Embankment but I was too far ahead so I was up on the loop towards St Paul’s before they ran on the return part of the route. I was mindful of the hot weather so tried to keep my pace in check, certainly slower than the sub-5 min kilometre that I would have normally aimed for, and I was soon passing the 5km mark. The notable incidents during the first half of the route were the ‘mist machines’, which were pretty crap to be honest and failed to cool me down, and a tiny woman who clipped my front leg as she suddenly decided to run directly across me at the first drinks station. Thankfully I was able to catch a glimpse of her before she jumped in front of me so I was able to check my complete fall onto the ground and the carnage this would have caused to all the runners around me.

There were other bands along the route and many of the runners gave them a cheer or a wave or just some thumbs up as they passed. I think the inclusion of the bands was a very nice touch and my favourite was the Japanese style drummers on the cobbled section somewhere around the 5km point. They were setup in a narrower segment of the route where there were some good acoustics from the closed up buildings so their drumming provided a good tempo for my pacing.

I was soon back running on the Embankment again with Big Ben in my distant sites with the opportunity to grab another bottle of water as we passed the water station again. My legs were starting to feel the pace but I latched onto a couple of runners just in front of me who were running around the pace I wanted to hold and kept up with them as we skirted close to Parliament Square. I spotted a lady garbed in an Ealing Eagles running vest (my local running club who I should go and join at some point) passing me and in the distance I spotted some large Ealing Eagles banners and she generated a huge cheer as she passed them. I altered my direction slightly and gave a shout out to ‘Ealing’, which is where I live, and they gave me a cheer in response.

With the 400m to go sign on my left it was time to up the pace and go for a grandstand finish but unfortunately my tank was pretty much running on empty and it was quite a feeble attempt to be honest. A guy on my left was full of energy as he shouted out for the crowd to cheer, which they did, while another runner tapped me on the shoulder and told me to sprint for a sub-60 minute finish (my watch was showing 54 minutes!). Most of the runners were aiming for the left had side of the finish area but it seemed less congested to the right so I changed direction and found myself crossing the finish area just as the race winners Mo Farah and Mara Yamauchi were being interviewed for the crowd and media. I gave a speedy shout and wave to them and was rewarded with a smile and wave back, which made my day and cupped a great race for me.

This was certainly not my fastest race ever and I was just over 4 minutes off my target time but the sun and high temperature made me pace myself more carefully. The overall organisation of such a mass participation race was superb and I enjoyed running past some of major London landmarks. There were a few sections of the route that narrowed quite a bit but I did not experience too many problems as the start waves kept the crowds down to a manageable level. The water station set-up was ok and served its purpose but it was only serving on one side and contributed to the crazy runner who nearly took me down. I would not normally grab any drink on a 10k unless I need to quickly rinse out my mouth and it was only the hot weather that made me pull over during this race. 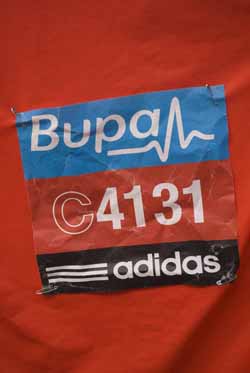 After collecting my bag back in Green Park I was able to grab a section of shade under one of the trees where I went through my stretches while snacking on some of the nuts in the finishers bag. Mrs Dan & The Son arrived shortly after and I met them at Piccadilly Circus before a short walk to a nearby Japanese ramen restaurant where we had lunch together. We then spent a couple of hours in some of the shops before heading home.

I had a great time running this race and there are very few opportunities to run with British elite athletes. The route took in part of the 2012 Olympic marathon route, which is why there were so many British and Japanese elite long distance runners taking part this year. Of course the fine weather had a big part to play in making the whole experience so good although it did make the actual running just a bit harder than expected. I enjoyed this so much that I have already signed up again for 2013, where the race reverts back to the Bank Holiday Monday, thanks to the priority entrance email that arrived as I was typing this race report. 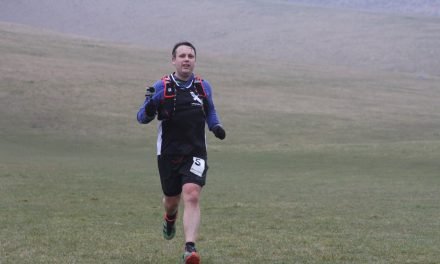