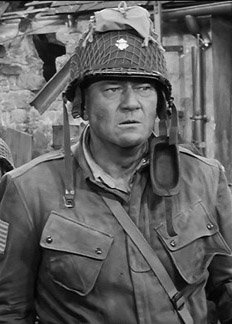 Marion Robert Morrison was a fine figure of a man and nothing screams masculinity as much as John Wayne with his demeanour, calm voice, and his distinctive walk. John Wayne chewed his way through the scenery in the 1962 war film about D-Day as Lt. Col. Benjamin Vandervoort and yesterday I faced my own personal longest day as I stared down the barrel of a 20 mile long run.

So Sunday 1st April 2012 saw me send Mrs Dan and The Son out for the afternoon as I donned my proposed Brighton Marathon race kit, loaded up my energy gel belt, stuffed some coins into my pocket, and headed out for a 20 mile run in the pleasantly cool West London sunshine with the goal of breaking the 20 mile barrier for the first time. I had no route in mind until I started off so ran towards the nearest park and then decided to try and complete a loop of the Ealing parks because it would give me something to look at and I generally hate the ‘there and back’ and ‘multiple loop’ style runs. As expected there were plenty of people out enjoying themselves in the parks so I had plenty of ad hoc cricket matches to watch and also people indulging in their crazy kite & glider flying shenanigans.

I made a few pit stops around my route to buy some water to either sip or to drink as I consumed the gels. I settled into my desired pace of 10 minute miles well enough although was caught out in one of the parks as I stopped at the kiosk to buy some more water but found myself behind Indecisive Woman who could not decide what to buy and then spent an age trying to find her money before once again changing her mind about her order. This broke up my rhythm and I did not hit it again until around the 14 mile mark when all of a sudden I got myself into a nice groove that I carried for another 2 miles.

The final mile and a bit was bit of a struggle but I am putting that down to a mental barrier rather than being able to carry on running because I was approaching home and my pace began to drop in anticipation. I was quite chuffed with how the run went overall and having cracked the 20 mile barrier, I now have faith in my legs to carry me around the magical 26.2 miles. I am hoping that the crowds lining the marathon route will give me the required lift for the final hour of running and help carry me to the finish line. I do need to make sure that I settle into my desired 10 minute mile pacing and not get carried at the start as the crowd cheers and the potentially faster runners zip past. Now it’s just a case of tapering down my runs and getting my kit bag ready for the big day, checking all the instructions again, and then triple checking everything before driving down to Brighton.