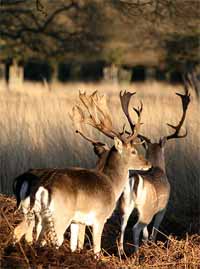 The weather finally seems to be turning and the sun was out so we loaded the car up with our bikes and headed over to Richmond Park. We still have not sorted out a bike rack for the car so it meant laying all but one of the back seats down and then me carefully stacking the bikes up on top of each other before crossing fingers and gently closing the back. This works perfectly for loading but the bikes then shift during the journey and I then spend ten minutes trying to remove the pedals from wheels in some sort of bike shaped Rubik’s cube.

We were soon off cycling round the outer paths of the park and due to the nice weather there were plenty of walkers and other cyclists out and about. I told The Son to watch out for Fenton so he was scanning for dogs but there was no sign of him. However, a small dog did come steaming out of nowhere chasing a couple of geese who then proceeded to take flight and nearly smack The Son in the head.

We had a great time cycling around the park with The Son loving bombing down the hills and me just behind him with a big grin on my face. We have made the pledge to go buy a bike rack so we can get the bikes on the car without the fear of breaking spokes so we can visit some more cycling friendly locations during the summer.