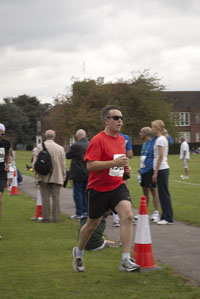 The 2011 Moor Park 10k and Junior Fun Run was a late addition to my race calendar following the recommendation of a family friend and also had the dubious honour of being my first race following a lapse in my normal training. I always seem to have a period of minor injuries around August where my training suffers and this year was no exception. However, I was fit enough to enter and use the event as a normal training run while The Son was more than willing to take part in the Junior Fun Run. We arrived at the venue reasonably early and took some time to look around the small amount of stalls and also watch the start of the Under 12  2.6km race so The Son could then see the route that he would then have to run. He seemed a little shocked at first as he thought that his race would be 2.6km but he was much happier after we explained that his race was only one lap and 1.3km in distance.

After stressing to The Son that he needed to pace himself and not try to sprint the entire race, like he tried previously at the Crouch End Junior Fun Run, he was soon lined up on the start line. There was plenty of gentle pushing and shoving from the kids as they jostled for the front spaces and the line of kids kept moving forwards while the race marshals had to keep asking them to move back so that they were back on the actual start line. Finally the boys were off and running and we watched them circle around the playing field and eventually the front runners were crossing the finish line. The Son looked exhausted as he ran the final bend but he did manage a final sprint across the line to make sure that no-one overtook him and then managed to collapse onto the floor clutching his bottle of water after his medal had been draped around his neck. Thankfully his tiredness was soon solved by a quick visit to the cup cake stall and he was soon eyeing the big bouncy castle style slide.

There was quite a gap until the start of the 10k so we amused ourselves by watching some of the morris dancing in-between The Son snacking on some more cupcakes and a hot dog. I believe that in previous years the 10k would be run in the morning followed by the junior races in the afternoon but this had been swapped, possibly to encourage more to watch and cheer the junior races. However, it did mean that we were hanging around until the start of the 10k so it was a little boring for Mrs Dan and The Son. If the weather had been warmer then we would have probably taken a picnic but it was a bit cloudy and overcast so we did not really have that option. If I did consider running this even again in 2012 then I would probably just enter the 10k and then arrive in the afternoon by myself rather than asking my family to wait around for several hours with little to do.

Finally the runners were bunching up near the start line but again there was a delay as the start time was put back by 10 minutes to allow for all the people still trying to drive into the parking area. There was plenty of parking space on a large field and it was well marshalled but it seemed like a lot of people all tried to arrive near to the start time and the weight of cars started to block up the entrance.

The 10k was soon under-way with the same lap of the playing field that The Son completed earlier for his race and as we circled back past the start line there were still latecomers sprinting to the start to begin their race. The course then headed out to the private estate at the far side of the school and it was interesting to run through such an affluent area and take a look at the large houses. The flat part of the race seemed to be over soon as we turned into the golf course and tackled two long and somewhat arduous climbs. I am not sure what all the golfers made of the runners stopping their play but was I was too focused on beating the first hill than to worry about interrupting their round. The first hill levelled out at the old manor house and I thought that would be the end of the hills but around the next bend there was another equally arduous climb that I was determined to make sure I ran up rather than resorting to walking. Thankfully the climb was soon over and there was a lovely downward section that allowed me to catch my breath again. The rest of the course continued through the private housing estate and then back to the school grounds for a final lap of the fields and then through the finish arch. One of the runners just behind me managed to lose the route through the final bend of cones and started to run through the spectator area until people started to shout and get him back to the finish line.

There was no chip timing for this event so my timing is based on my Garmin watch and the race timers.

One of the regular runners was unable to race this year due to an injury so instead filmed this great video of the day: