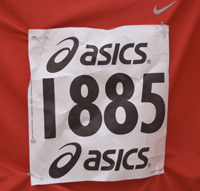 My first race of the year took place on Sunday 15th May 2011 starting on the Hampton Estate for the Farnham Bluebell Run as organised by the 2nd Farnham (Hale) Scouts. The route was mostly trail based and started on the Hampton Estate before passing through nearby woodland with some road crossing along the way (on-line route map). There were 2 road crossings and the police had advised that the roads could not be closed and marshals had no authority to stop traffic but the marshals did a great job in making sure runners crossed safely while drivers did stop to let the clustered runners pass.

However, I am getting ahead of myself by discussing the route before I talk about the events leading up to the race. I didn’t have this race on my calendar for 2011 and I had never participated in a trail based race before but joined this one since a work colleague was running and asked if I wanted to join. I checked out the location, which was within driving distance, and entered the 10k to confirm my place for what was the first running of this event. The organisers also offered a 5k race and a ‘walkers’ event for the non-runners to enjoy the woodland route.

My satnav directed me near to the starting point although I was very thankful for the written directions I had printed off the web site and also the clear signs directing everyone along the country lanes to the car park. There was plenty of parking on-site and with marshals armed with large foam hands, the route into the parking area was clear and easy. Race numbers were to be collected on the day so I walked up to the staging area and found my name / details on the entrants table then took my number sheet to be pinned onto my top. My colleague hadn’t arrived yet (we have the same first name and last initial so easy to check) so I took a walk around the staging area that was being run by the Scouts and must admit that I nearly drooled as I watched the bacon & sausages being cooked on the grill.

With time to kill I walked back to my car to pin my race number onto my top and to get changed into my running kit. Jogging back to and around the staging area as a warm-up I found my colleague and we hung around waiting for the start. Everyone was soon corralled together by the race starter and led down to the start line. This was a small event so there was no chip timing and, if I remember correctly, the race was started by the ringing of a large hand bell. I wasn’t quite sure where to place myself at the start (clearly not on the start line!) so placed myself quite far back. The race was soon under way with the runners setting off first, followed by the walkers, and I found myself weaving through the crowed as I had clearly started too far back. Thankfully the pathway was reasonably wide and I was soon running past the stump of a giant beanstalk that was part of a closed off film set. The course then took in a fairly hefty hill before crossing a road and onto a trail running alongside a field.

After some fun through narrow trails in the woodland, where I was stuck for a while behind a slower runner with nowhere to overtake, and an extremely welcome long downhill section led to the finish line for the 5k runners. The 10k runners were ushered to the right and we carried on until eventually we performed another loop through the field and into the woodland trails but now with the added fun of dodging the walkers. I have to tip my hat to the walkers because they were more than alert for runners and moved to one side to allow me to pass. With only 1K to go I was busy struggling up the last hill when a stray tree root shot up and looped around my ankle as though the Womping Willow was attacking me (well, either that or I was tired and tripped on a tree root). A nearby runner was kind enough to stop and make sure I was ok before she ran off again so with nothing hurt but my pride I sprinted down the much needed downhill section and crossed the line. I stretched myself out at the finish line to wait for my friend to finished before we both walked back to the staging area to collect our finishers information.

Many thanks to the organisers for putting on such a well organised début event, which provided an introduction to trail running to me. I really enjoyed the run and particularly the hilly sections, which I want to tackle again next year just to prove who is the boss.

The all important race information (not chip timed):