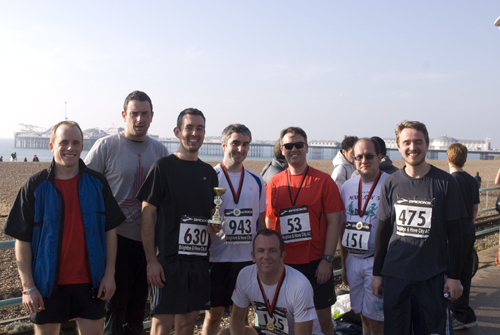 My third consecutive appearance at the Brooks Brighton 10k and once again it would be following a period of reduced training caused by minor strains. My yearly schedule seems to peak in late spring and summer and then gradually decreases until I finish my race diary in Brighton. This year I had organised a challenge for current and former work  colleagues who have either taken part in this race before or are themselves runners. To keep things interesting we based our mini-race on a first past the post system rather than looking to see who recorded the fastest chip time.

The early morning rise and drive down to Brighton did not go well for me as I made the rookie mistake of not checking that the car had enough petrol for the journey. I was due down by the start line early to check all our our team in and organise everyone into a group in the start area so we all started in a couple of lines. Instead I was busy motoring around the countryside as my satnav directed me to the nearest petrol garage while I kept my fingers crossed that I had enough fuel to make it. This added a good 30 minutes to my journey so ended up parking a lot further from the start than planned and I only just made it to the meeting point in time to herd everyone ready for the start.

We were soon off and I had to grin and watch my fellow competitors slowly moving ahead of me as I knew that I was well off in terms of fitness and race preparation. The Brighton 10k still retains the 3k out and back to the start / finish area so it gets quite cramped for space but I was prepared for this and just went with the flow of people until the path widened as we ran past the pier. Thankfully the organisers have improved the km markers over the years and there is plenty of help on the way to gauge distance. This year even saw bright sunshine and I was chuffed that I had gone for my summer running outfit and my sunglasses because I was soon very hot.

My lack of recent training contributed to not enjoying the run that much as I struggled with the pace and it’s always difficult when you know that there is no chance of matching you normal times (let along best times!). We all met up at the finish in time to hold our little award ceremony with a small trophy given to the winner. Unfortunately I know that I cannot run the 2012 Brooks Brighton 10k so won’t be there to try and take the title. 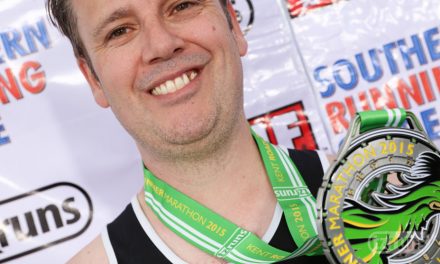