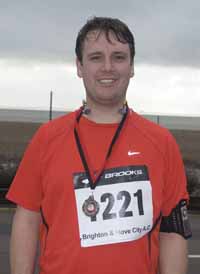 This is as retrospective race review since I only fired up the Running Dan blog at the end of 2011 and this race took place on the 15th November 2009. However, it has a fond place in my heart because it was my first ever race and I plan to writing about all my previous races so they act as reference points for my running progress.

I had been running for nearly 2 years but the time this race appeared on my calendar and it was the direct result of receiving my first London Marathon ballot place rejection. I had subsequently applied for the adidas Silverstone Half Marathon and so wanted to get a smaller race under my belt as part of my preparation. It also helped that the company I work for has  Brighton  office so I was fairly familiar with the area and a work colleague had run the Brighton 10k several times before so recommended it to me.

The event is well organised and easy to get to with plenty of parking directly along the seafront close to the start area on Madeira Drive. The road is closed for the race and runners are allowed to park along the road with the normal parking restrictions lifted (i.e. no parking fee). I had been told to get there reasonably early because that means a parking space closer to the start line and that would also give me time to warm-up before the start of the race. I have since run this race two more times and my advice for any runners driving to the event it to get there reasonably early so that you secure a parking space closer to the start & finish area.

Mrs Dan and The Son had accompanied me to lend me their support but it was cold and windy so they headed off to find a hot drink and some shelter while I completed some gentle jogging. The weekend had seen the south coast hit by strong winds and notable storms but we had lucked out as the storm broke on the Sunday morning and the rain stopped just as we drove into central Brighton.

There are roughly 3,000 runners at the Brighton 10k and the route is a very flat there and back along the seafront. I was not quite sure where to place myself in the crowd at the start so went very near the back as I was unsure just how fast I would be compared to the other runners. As a beginner I would have benefited by much better suggested segregation based on estimated finish time, something I have come to like and expect through other races. The race was soon under-way and the first 3k consists of a there and back on Maderia Drive to the start / finish area before continuing a much longer there and back past Brighton Pier. I found it very tricky trying to keep my normal pace as I was bunched it with the thousands of runners along a narrow stretch that was narrowed further as the frontrunners soon came hurtling back towards us with bike based marshals keeping us ‘plodders’ out of the way.

The field started to spread as the course passes the pier and the path becomes wider but it’s not a closed route so you have to watch out for the odd pedestrian along the way. There was a drink station, which I found useful as the strong wind was blowing sea spray into the air, and I used the water to wash away some of the sea taste. There were not any markers on the course so I was relying on my iPod / Nike+ combination to keep me informed of distance and the race leaders were soon streaming past on the opposite side of the path as they were well on course to finish the race. The final turn soon beckoned and with the wind at my back there was a nice run back to the finish where The Son was holding up a hand-made sign as I crossed the finish line.

The Brooks Brighton 10k is a well organised event that welcomes beginners and experienced runners alike with a great chance to record a personal best on a flat there and back style course. The 2009 race would have benefited for more / clearer signs to indicate distance run on a per km basis and the finishers pack is just a bog standard medal rather than anything to keep and treasure. I have subsequently run this race twice more so will cover the changes across the next reviews.