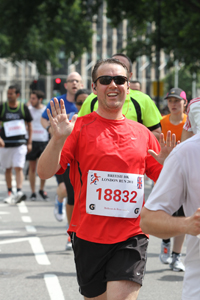 The British 10k London Run is bit of a strange race in that it is a large scale, well advertised, and well attended event, but suffers from a poor approval rating from the community on the Runners World Forum. I was debating whether to enter this race, mainly because of the high entry fee, but equally I wanted to take part in a run through some of the major streets of London so decided to give this one a go. I paid for my entry although for the first time I did not go for an official timing chip since it was not included within the entry fee and I did not feel it was worth the extra charge given I could time myself with my watch.

I was wary of being stuck in a large crowd at the start and the prevailing advice on various running forums was to arrive early and endure some standing still waiting time to try and get as close to the front as possible. This event is well known for attracting a large number of first time runners or non-runners participating on behalf of various charities, which is an admirable thing, but with no staggered starts or starts based on predicated finish times it does mean that frustrated runners are trying to weave around frustrated walkers who are unhappy about being jostled. So I was on an early train from West Acton into London and I joined other keen runners heading to the same run as I noticed a lot of British 10k timing chips attached to laces and race numbers stuck to bags.

I quickly found my baggage drop area and went for a gentle jog around the nearby streets along with a toilet break. Again, the entrant magazine highlighted the high numbers of runners and the ratio of toilets provided so I wanted to get ready before any large queues formed. With a steady stream of people heading towards the start area I decided to carry on with my warm-up by jogging up to the start line. The waiting runners were initially being held at the top of St Jame’s Street where it meets Piccadilly so it was a case of trying to keep warm while being stuck in a crowd for a good 45 minutes before the marshals led the runners along Piccadilly to the start line at the top of the slope by the Piccadilly Arcade loop. I did notice that there was a fair number of runners warming up in Green Park who then slipped out into the moving start line to ensure that they were nearer the front (so if you did reach this blog entry to try and seek some advice on running this race then you could take the tip to avoid the crowded wait area and just perform your warm-up in Green Park alongside the road and then slide onto into the walking crowd as they are led towards the start line… although debating the ethics of this I shall leave to you).

Unfortunately we were kept waiting again following the move to the start line and eventually a marching band made its way along the opposite side where they then proceeded to play the national anthem before the race was allowed to start. I probably would have felt this was a nice touch for a race billed as the ‘British 10k’ but I would have much rather started the race on time than have to wait even further. Finally the elite runners were under-way and I snaked around and was running under the start arch and then along to Piccadilly Circus. At this point I appreciated just how many people were taking part in the race as thousands were still waiting to shuffle up until the start. It was still a little crowded as the route turned into Trafalgar Square but it was nice to have lots of cheering people on the paths encouraging all the runners. With the road widening as we turned into Embankment I was finally able to hit my stride and it was nice to see a water station because it was a hot day and I needed something to cool down a little. However, I did start to wonder whether the water station had enough helpers to hand out the bottles as I pictures the thousands of runners and walkers who I knew would be making their way down over the next 20-30 minutes. 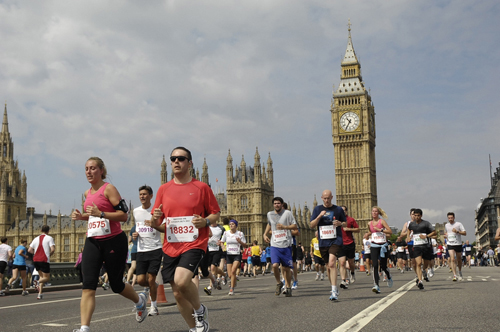 The elite runners were soon passing us on the opposite side as we descended through the Blackfriars Underpass, where a lot of runners made use of the tunnel acoustics to shout out and make echoes, before we looped up and around back onto the Embankment but now on the opposite side. Thousands were now streaming along the route we have already passed through and my fears about the early water station were correct as runners were having to stop and force a way to grab their own water bottle through a crowd. I generally do not need to take on any liquids for a 10k but this was a hot day and there were a lot of non-runners who probably needed water to keep them going and, although there was plenty of water bottles, there just wasn’t enough people staffing the first station to keep up with the demand to hand them out and keep people running.

I made sure to enjoy the view as I passed opposite the London Eye and then looped across Westminster Bridge and through to Parliament Square where I was able to give a quick wave to the protesters manning the centre section of the square. A final burst saw the finish line in site just past Downing Street and I was able to sprint through for a reasonable time given the heat and the amount of runners lining the course.

I enjoyed my run through a sunny central London and it was nice to run past so many famous landmarks but it’s not an event that I will enter again. The entry fee was staggeringly high and the organisers have raised this cost even further for 2012 in some a very tenuous attempt to associate the event with the Olympics just because they are going to be in the same city in the same year. The event literature has to be very careful to not impinge on the Olympic trademark but with ’2012′ plastered all over the t-shirts and adverts, the organisers are certainly trying their best to skirt the legal association. I would also avoid the race because it clearly needs to implement some sort of mechanism to either implement wave starts or at a minimum attempt to get starters into blocks based on their projected finish times. I read through the forums after the race and found plenty of runners unhappy about having to force their way through blockades of charity walkers stretched across the width of the road and equally complaints from charity walkers / runners upset about people jostling and barging past them.

Due to the high cost of entry I did not pay extra for a timing chip so can only provide my time based on my own Garmin watch, which is only going to be a few seconds out anyway.