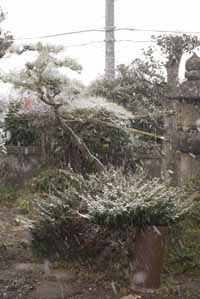 Our final full day in Ube and I woke to the sight of swirling snow. It was not enough to settle, nor rival any of the storms currently battering the UK, but the blustery wind made the visibility poor as we set out to visit another nearby hotel based onsen and restaurant where we sat and ate lunch while looking down on a fishing village and its surrounding islands.

The hotel had a small room dedicated to the life of Japanese runner Hideo Hamamura, who had the distinction of winning the 1955 Boston Marathon in a then course record of 2:18:22. He then went on to represent Japan at the 1956 Olympic Games in Melbourne, where he finished 16th in the marathon, and also won a number of prestigious long distance races in Japan before taking up coaching and holding various positions in JAAF (Japanese Amateur Athletic Federation) following his retirement. The display of his achievements was an unexpected find is such a remote location and included both memorabilia from his running career and the output from his painting in later life. 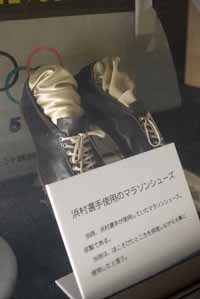 We had a few last minute gifts to collect on the way back and The Son went off with his grandmother to buy some lottery tickets. We came back to find The Son being interviewed by a TV journalist and cameraman, who were there filming a piece on the lottery booth having sold major winning tickets the past two years. We made a note on when the piece was to broadcast and headed home to find that we all briefly appeared on the local evening news show. They did not use the interview with the The Son but there was a shot of the booth with him in the centre of the shot looking at the camera and me standing to the side. Sadly none of our tickets won a prize.

I went for a run in the evening  accompanied by Mrs Dan also exercising with her walk-run-walk schedule. I ran on the beach then followed a road that runs parallel to the coast. I made sure to run a series of small loops to check that Mrs Dan was safe then at the 5k mark stopped running so that we could walk back to the house.