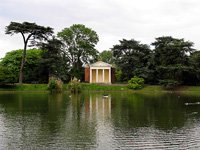 The Son was scheduled for some extra 11+ preparation lessons so I had to skip my normal Sunday karate class and was instead busy acting as a chauffeur service while Mrs Dan was out and about doing her thing. We swapped over in the afternoon so that she took The Son into central London as he needed a new dictionary, something more comprehensive that the one he has been using, and also so that The Son could buy some more books. He has really been bitten by the reading bug over recent weeks and we are keen to encourage his reading as much as possible so that his vocabulary is always improving.

Our nearest tube station was shutdown for the day because of planned engineering on the line so I changed for my weekend long run and visited Gunnersbury Park after dropping them both off at a station where the trains were running from. I have this “thing” about running at Gunnersbury Park and rarely enjoy running there but always go back in a bid to prove that it’s not a bad place and does not hold some sort of running voodoo over me. I was wrong once again and I just did not enjoy the run at all, even to the extent that I cut the run short and went home.

I really cannot explain why I do not enjoy running around this particular park. It’s not as though I run here so often that I feel weary with the same view, the park itself is large and has plenty of nice scenery, and there is no previous incident that has scarred me for life. Today my legs were heavy, I felt tired, and everything about the surroundings just made me miserable. I am sure that I will be back in the future though to get this monkey off my back.